The Briscoes looked to add another pair of tag titles to their resume last Saturday: 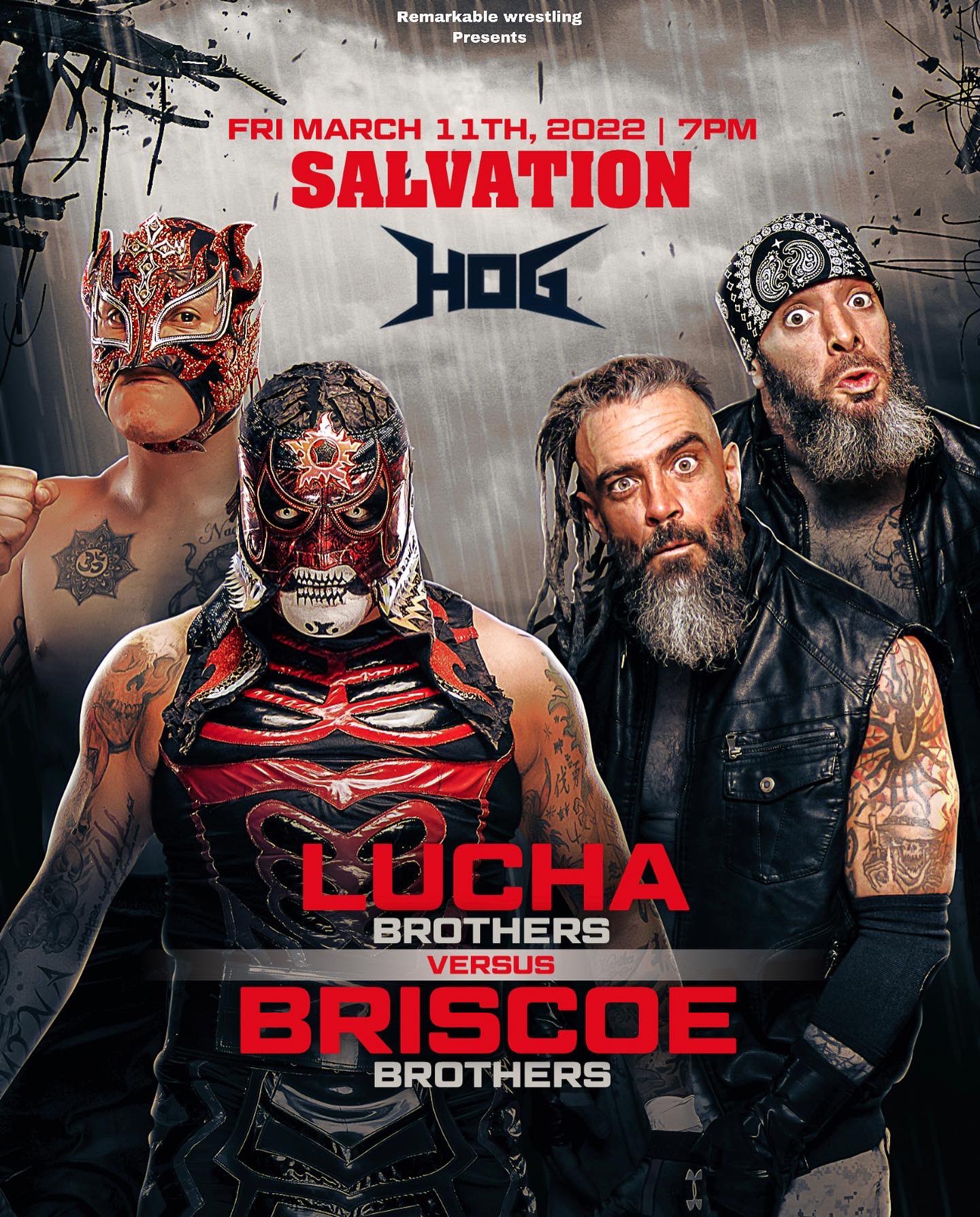 The Briscoes have been champions since 12.11.2021 and this is their second defense. Penta and Fenix have been champions 9.8.2019 and this is their second defense (friggin’ pandemic.) Arez is standing in for the injured Fenix. Penta and Arez’s speed serves them well in dazing the Briscoes. Although Arez is able to take them down with a tope con hilo, a spicy dropkick from Mark and Jay sending Penta into the barricades turns things in Dem Boys’ favor. Mark wipes them both out with a chair-assisted tope con hilo, and then with Jay’s help beats down Arez back in the ring. Arez dives out of the corner and over the Briscoes in order to tag in Penta, who takes down Mark with a back cracker, and then uses Jay to wheelbarrow himself into a Mexican Destroyer on Mark. Mark yakuza kicks Arez when Penta whips him to the corner, and Judo throws Penta. Jay’s Hangman’s neckbreaker on Penta gets him a two count. Arez wipes out Jay on the floor with a backflip moonsault off of Penta, and Penta double stomps Mark in a tree of woe. A series of offenses leaves all four men lying. Penta and Jay fight on the apron, ending with Jay giving Penta a Death Valley Driver. Arez and Mark trade shots inside the ring, with Mark also landing a Death Valley Driver. Redneck Boogie scores the Briscoes a two count. A lariat from Jay and a Froggy Bow from Mark win The Briscoes the match and the HOG tag team titles at 13:25. It’s a shame Fenix was still hurt for this, as this is a bonafide dream tag match waiting to happen. Arez was a perfectly cromulent replacement, however, and that kickflip moonsault of his was the standout moment of the match. The story played out well, with the Briscoes Alpha, Jay, taking out the other team’s Alpha, Penta, and then aiding Mark in taking out Penta’s partner. Even if this doesn’t scratch the exact itch Lucha Bros vs Briscoes will hopefully provide one day, this was still very fun. ***¼

Deonna Purrazzo’s “Champ Champ” challenges have seen wrestlers challenging for one of her two titles, but on Thursday, she put both of her titles up for grabs in a one-fall triple threat match: 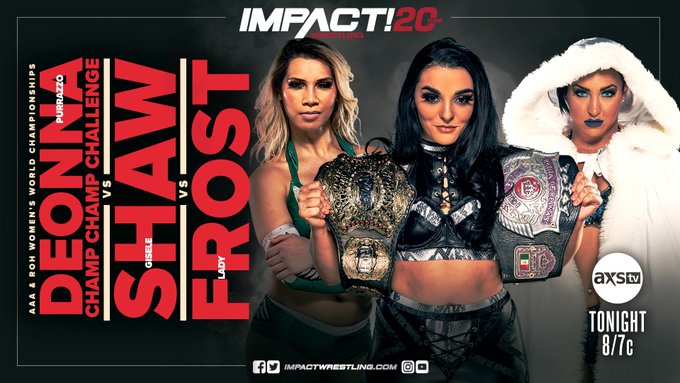 Purrazzo has been ROH Women’s World champion since 1.13.2022 and this is her fifth defense. She has also been the AAA Reina de Reinas champion since 8.14.2021 and this is her third defense. Purrazzo at first seems content to let Shaw and Frost fight, but quickly realized that she could lose her titles without being pinned if she wasn’t actively involved. Shaw sends Purrazzo to the corner with a running headscissors. Purrazzo gets a boot from out of the corner, and Frost reappears with a high crossbody to Shaw. She cartwheels into a dropkick to Purrazzo, but Shaw cuts off Frost with a clothesline before she can land a snowball fight senton. Purrazzo slinks to the floor after colliding shoulder first into the ring post. Shaw damn near killed Frost with a standing Spanish Fly. Purrazzo breaks up her pin and then lands a standing moonsault onto both of them. As Purrazzo has Shaw in a Fujiwara armbar, Frost locks Purrazzo in a kneebar, and Shaw grabbing the ropes breaks both holds. Shaw cuts off Frost again, giving her a half-nelson suplex and a senton splash for two. Frost finally hits the snowball fight senton in the corner on Shaw, then Purrazzo German suplexes Shaw and Frost at the same time. Purrazzo rolls out after Shaw superplexes her. Shaw wipes out Frost with a superkick for two. Frost comes back with a rolling boot. Frost takes out Shaw with a flying blockbuster. Purrazzo comes in and stuffs Frost with the Queen’s Gambit for the pin at 6:08, with Shaw fingertips away from breaking up the fall. It was clear the champ was the most absent from the proceedings, but Shaw and Frost did an acceptable job keeping things together. Shaw is really, really good, Frost more than held her own, and they packed a lot of action into six minutes. **¾

Another Gresham title defense finally saw the light of day, with him putting the title on the line against a former NWA World Champion: 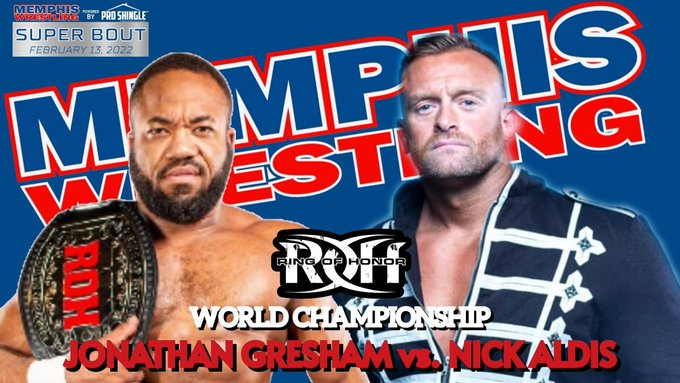 Gresham has been champion since 12.11.2021 and this is his ninth defense. Aldis controlled Gresham in a headscissors on the canvas. When Gresham does escape, he gets Aldis in a modified surfboard momentarily, before Aldis flips over into a lateral press to escape. Aldis then holds onto Gresham in a courting hold, going back to it each time Gresham escapes. Gresham finds an opening for a crossbody attempt, but Aldis catches him and delivers a bodyslam. Aldis wears down Gresham’s back. Gresham chops at Aldis, and when Aldis knocks him down with punches, Gresham pops up with an enzuigiri. His back is in too much pain for a German suplex, and gets in even more pain after a second rope dropkick. Gresham does however land a lionsault press and applies an ankle lock. The momentum from pulling him up out of the moment enables Gresham to successfully pull off a German suplex. Aldis comes back with a Michinoku Driver. A video from Matt Cardona interrupts the broadcast, as Aldis is set to face him for the NWA Title the day after this match aired, which distracts Aldis as he is climbing to the top rope. Gresham brings Aldis down to the mat in a figure four leg lock. Aldis’ shoulders are down for a three count, and Gresham retains the title at 19:07. The wrestling was top notch, but the commercial interruptions and then Cardona’s video interruption totally threw off the matches flow. Under different circumstances and in a different promotion I feel like this would’ve been way better. **½

Now onto this week’s episode, which is the first part of Jonathan Gresham’s Championship Journey series. This two-part series will showcase all of Gresham’s outside title defenses he has made since ROH’s hiatus.

The episode begins with the final moments of the title match between Gresham and Jay Lethal at “Final Battle 2021”, where Gresham won the ROH World Championship by submitting Lethal in an Octopus Stretch and elbowing him repeatedly in the side of the head. Gresham talks about the emotion he felt in those final moments, and how the only thing he could do when he won was scream. He says winning the original ROH World Championship was part of his destiny, and is the biggest moment of his career.

Gresham then discusses his first title defense against AJ Gray in GCW. His biggest concern was Gray’s lariats. Although Gray did indeed clobber Gresham with a couple of lariats, Gresham’s first defense ended the same way as his title victory: pummeling Gray in the head until the referee called for the bell.

Gresham’s second defense was in Mobile, AL for New South Pro Wrestling against Adam Priest, who Gresham says is one of his favorite opponents. A mat wrestling battle would conclude when Gresham caught Priest in a headscissors and pulled his legs back to pin him in the hold.

History would be made when Gresham would defend the ROH World Title in Impact Wrestling for the very first time against a mentor and opponent, Chris Sabin. A hard fought bout concluded when Gresham escaped a Magistral Cradle, gave Sabin one of his own, and then put him in a back bridge to get the pin.

One of Gresham’s top goals is to wrestle legendary individuals from around the world. He got that chance for his fourth defense when he wrestled 2 Cold Scorpio in GCW. Gresham would end up making the innovator of the 450 Splash pass out in a sleeper hold.

When he won the title, Gresham promised that ROH’s hiatus would not mean honor would go on hiatus, and because of that, he created TERMINUS. The main event of their first show saw Gresham put the title on the line against Josh Alexander. This match is shown almost in its entirety:

Gresham has been champion since 12.11.2021 and this is his fifth defense. The Pure Rules are as follows:
*The competitors are to obey the “Code of Honor”, shaking one another’s hand before and after the match.
*Each wrestler has 3 rope breaks to stop submission holds and pinfalls. After a wrestler has used all 3 of their rope breaks, submission and pin attempts on or under the ropes by the opponent are considered legal.
*Closed-fist punches to the face are not permitted. Punches to other parts of the body are permitted, excluding low blows. The first use of a closed fist results in a warning, a second will be a disqualification.
*This match has a 60 minute time limit.

Gresham angers Alexander after a couple neck drags and a dropkick. Alexander takes Gresham down with a running boot and twists on his left ankle. He rolls Gresham into an ankle lock, and Gresham uses his first rope break to escape. Gresham quickly uses his second rope break to escape a half crab with a lot of torque on the ankle. Gresham dropkicks Alexander’s knee out and locks him in a figure four, forcing Alexander to use his first rope break. Gresham uses the ropes to pull off a headscissors. He goes for the figure four again, and Alexander cracks him with a closed-fist to stop Gresham, earning Alexander a warning. Gresham escapes a double underhook and takes Alexander down with a dragonscrew leg whip. He catches Alexander in a crucifix pin. Alexander boots Gresham after kicking out, then catches Gresham’s lionsault press and drops him with a tombstone piledriver for two. A forearm exchange ends with Alexander ducking an enzuigiri from Gresham and putting him in an ankle lock. Gresham frees himself by kicking Alexander’s hands. Alexander hesitates when he almost uses a second closed fist to stop a drop toe hold. He is able to nail Gresham with a forearm strike and give him a double underhook piledriver. Gresham uses his third and final rope break to prevent the pin. Alexander stomps Gresham’s ankle and re-applies the ankle lock. Gresham rolls his way free. He rolls Alexander into a figure four, which Alexander blocks by twisting on Gresham’s left ankle. He puts the ankle lock back on. Gresham uses the ropes to pull Alexander throat-first into the top rope. Alexander however slingshot superplexes Gresham. They lock their legs, resulting in a double pin at 16:52. The referee calls this match a Draw, meaning Gresham is still the ROH World Champion. I can’t get too excited over a draw, especially as the main event of the first show for a new promotion. However, the wrestling was really good, so it at least delivered in that sense. Josh Alexander is so friggin’ good. ***¾

Overall: I adore that ROH is highlighting all of Gresham’s outside title defenses. It gives people who aren’t as fixated on watching all of his defenses a taste of everything Gresham has done with the title during the hiatus before Supercard of Honor, and validates that these defenses actually happened, are acknowledged by the company, and matter. Glad we’re getting more of the same next week.