There was no match on the December 14th episode Week By Week, but the December 15th episode of Women’s Division Wednesday featured a tag team match that bridges the gap between “Final Battle” and next week’s episode of television:

Maria Kanellis-Bennet joins commentary for this bout. Rok-C successfully defended the ROH Women’s Championship against Willow at “Final Battle”, and will defend the title against Holidead next week. McKay and Willow’s opening exchange ends with Willow taking down McKay with a hard clothesline. McKay takes down Willow with a dropkick for aone count, then pulls her to the corner to tag Rok-C. Rok-C tornado clutches Willow into the Rok Knees for two. Rok-C drop toe holds Holidead, but Holidead pummels Rok-C to block a wheelbarrow. Rok-C then wheelbarrows Holidead into a pin for two. Rok-C comes off the top rope with a flying wrist drag to Holidead. Holidead pulls down McKay as McKay hits the ropes, which Willow disapproves. Despite this, she takes McKay to her corner where she and Holidead take turns wearing her down. After a while, McKay is able to plant Willow with a wheelbarrow bulldog and tag the champion back in. She takes down Willow and Holidead at the same time with a DDT/side Russian leg sweep combo. Holidead saves Willow from the Rok Lock. McKay tags in and wipes out Willow with a high crossbody. Holidead maneuvers McKay into a Complete Shot. Willow drops Rok-C with a Death Valley Driver. Willow accidentally superkicks Holidead as Holidead holds McKay. McKay drops Willow with a TKO for the pin at 11:41, with Holidead purposefully choosing not to save Willow. There were some messy moments, and the isolation of McKay felt super long, but this was an overall fun match and a solid way to set-up Holidead’s title challenge against Rok-C. **¾

Now onto this week’s episode, which is a “Top Prospect Special”, featuring many of the ROH Dojo trainees and other top prospects, as well the last two Top Prospect tournament winners. Throughout the night, we are shown clips from all tournament finals. Tournament winners include Mike Bennett (2011), Matt Taven (2013), Hanson (2014), Donovan Dijak (2015), Lio Rush (2016), Josh Woods (2017), and Dak Draper (2019).

Adrian Soriano vs. Eric Martin vs. Joe Keys vs. Rayo

This is Rayo’s first ROH match since “War of the Worlds 2019.” ROH Dojo trainer Will Ferrara is in Martin’s corner, and Soriano’s tag team partners Matthew Omen and Gabriel Hodder are in his corner. Rayo and Soriano are more proactive in their attack, while Keys and Martin take a more calculated approach, interrupting pins and interjecting when it suits them. Keys impressively pulls off a double German suplex on Soriano and Rayo. Martin rolls through a jackknife pin attempt from Keys and drops him with a powerbomb. Soriano drops Keys with a twisting neckbreaker for two. After the commercial break, Rayo butterfly suplexes Soriano into a backbreaker. Martin swings Soriano into a face first slam, and Keys breaks the cover with a falling super headbutt. Keys drops Martin and Rayo with a Gory Bomb/DDT combo. Soriano misses a frog splash on Rayo after throwing Keys outside. Soriano gives Soriano a rolling punt kick, then takes out Hodder and Omen. Martin dives onto Rayo, Hodder, and Omen and tosses Rayo back in the ring. Rayo evades a corner attack from Martin. He spikes him with a springboard tornado DDT and lands a springboard elbow drop for the pin at 7:57. This was a nice re-debut for Rayo, but sadly aired just a bit too late. The wrestling was fast paced and interesting for its duration which is all I ask from these showcase matches. ***

Rocco is in Makowski’s corner. We saw him scout Makowski during his debut, and it seems like somebody finally took him up on his client services! Eli Isom joins commentary for this match. Makowski snaps Caballero’s left shoulder something fierce. From there he’s focused on getting an arm submission, and even manipulates his other arm and neck in the process. Rocco looks pleased as Caballero grabs the ropes to break a Rings of Saturn like hold. Caballero manages to take down Makowski with a sit-out slam for two. Makowski snaps Caballero’s shoulder across the top rope, then rolls into the ring and into a bodyscissors looking for a choke or armbar. Caballero cradles Makowski to escape. Makowski comes back with a Sankakugeri and a butterfly suplex. Caballero catches Makowksi with a Sick Kick. As he looks for a torture rack, Rocco causes a distraction. Makowski kicks Caballero upside the head. He drops Makowski out of a cutthroat position and into a cross armbreaker, and Caballero taps out at 12:06. I am thrilled to see Makowski back in the fold and think Rocco as his manager makes sense. Again, it’s a shame they couldn’t get more out of this before the hiatus, as it shows a lot of promise, and do hope to see it continue when ROH returns. Caballero is really good too, and it’s nice to see him and Keys announced for the inaugural Terminus card. ***

Woods has been champion since 9.12.2021 and this is his fourth defense. This originally wasn’t for the title, but Dalton Castle convinced Woods before the bell to put the title on the line. Mike Bennett, the winner of the inaugural Top Prospect tournament, is on commentary for this match which pits the last two Top Prospect tournament winners against one another. The Pure Rules are as follows:
*The competitors are to obey the “Code of Honor”, shaking one another’s hand before and after the match.
*Each wrestler has 3 rope breaks to stop submission holds and pinfalls. After a wrestler has used all 3 of their rope breaks, submission and pin attempts on or under the ropes by the opponent are considered legal.
*Closed-fist punches to the face are not permitted. Punches to other parts of the body are permitted, excluding low blows. The first use of a closed fist results in a warning, a second will be a disqualification.
*This match has a 60 minute time limit. If the match goes past the time limit, three judges will determine the outcome.
*Any wrestler who interferes will be automatically terminated from the roster.

Draper inadvertently uses his first rope break to escape a slam. Woods puts Draper in a double wrist lock in the ropes, which Todd does not count as a rope break. Draper does however use a closed fist on Woods and is issued a warning. It helps Draper pull off a deadlift superplex. During the commercial break, Woods forced Draper to use his second rope break with a left arm submission, but Draper also regained control of the contest. Woods gutwrench throws Draper to the corner, and Draper responds with one of his own. Woods springboard gamengiri’s Draper, resulting in Draper falling to a seated position in the corner. Woods picks up momentum for three consecutive corner attacks. Draper maneuvers Woods into a powerslam for two. Draper comes off the top rope and Woods cracks him in the face with a knee strike as he comes down. Woods blasts Draper with a knee under the chin. Draper gets his foot on the bottom rope to stop the pin, using his third and final rope break. As Woods goes for a cross armbreaker, Draper rolls Woods onto his shoulders and muscles him up into a sit-out powerbomb for two. Draper goes for another powerslam. Woods counters into the Gorilla Slam for the pin at 13:45. I’m really glad this was made into a title match, and Draper’s Pure title challenge against Jonathan Gresham was one of my favorite matches of this calendar year. While this match didn’t reach the high quality of that bout, it was a great defense for Woods, and Draper’s best singles showing since that match. This was a great way to show how far both men have come since their respective tournament victories. ***½

NEXT WEEK: Rok-C defends the Women’s Championship against Holidead, and the return of the annual Christmas Surprise wildcard twelve man tag team match!

Gresham would make his first defense of the original ROH World Championship the same day this episode aired: 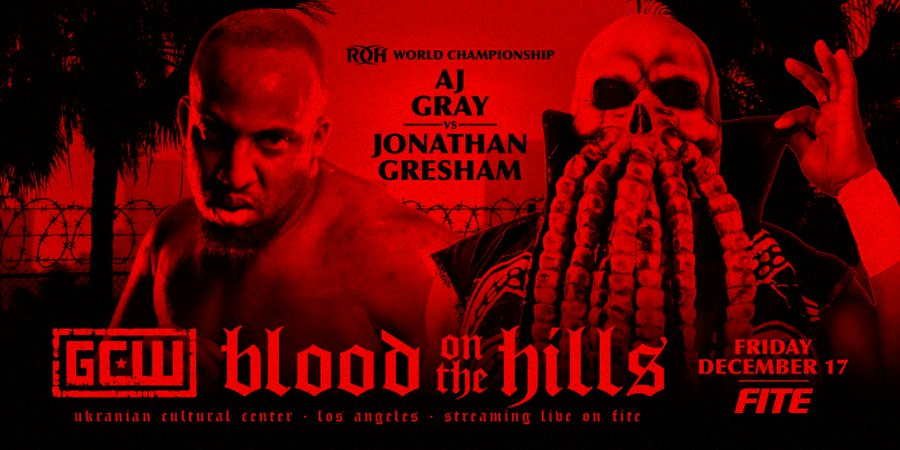 Gresham has been champion since 12.11.2021 and this is his first defense. The Pure Rules are as follows:
*The competitors are to obey the “Code of Honor”, shaking one another’s hand before and after the match.
*Each wrestler has 3 rope breaks to stop submission holds and pinfalls. After a wrestler has used all 3 of their rope breaks, submission and pin attempts on or under the ropes by the opponent are considered legal.
*Closed-fist punches to the face are not permitted. Punches to other parts of the body are permitted, excluding low blows. The first use of a closed fist results in a warning, a second will be a disqualification.
*This match has a 60 minute time limit. Not sure if GCW has judges to decide a draw.

Gray denies Gresham the Code of Honor. Gray pummels Gresham into the ropes, which might count as a rope break? Gresham attacks Gray’s knee and twists on his ankle. Gray uses his first rope break to escape an ankle hold. Gray nails Gresham with a knee strike to the face and connects with a moonsault for two. Gray stuns Gresham again with an open hand slap and pummels Greshamon the mat again. Gray may have been issued a closed-fist warning during this, but it’s unclear if that or a rope break by Gresham was counted. Gresham attacks Gray’s leg again and sends him outside with a headscissors takedown. Gresham wipes out Gray with a tope con hilo. Back in the ring he puts Gray in a figure four leg lock. Gray uses his second rope break to escape. Gresham ends a strike exchange with a German suplex. He knocks down Gray with a running forearm smash to the side of the head twice. Gray stops the third with a lariat, then delivers a short-arm lariat for two. Gray’s knee won’t enable him to deliver a powerbomb. Gresham hits that third forearm smash to the head. After a lionsault press, he rolls Gray into an ankle lock and then a German suplex. Another lariat from Gray leads to a powerbomb for two. Another lariat gets another two count. Gresham ducks a third lariat and puts Gray in an Octopus Stretch. He pummels Gray in the side of the head until Gray passes out at 11:10. The crowd didn’t give a fuck about this match. The wrestling was very repetitive and not really interesting, which is a shame as Gray had a good showing at Honor For All. Not a good start for Gresham’s title reign. *½

Overall: I really enjoyed this episode. It was a great showcase for current and former Top Prospects, and made me hopeful that they will be involved if and when ROH relaunches in April.