This week’s episode was a documentary about the Women’s Championship tournament. It took you through the formation of the division from the POV of Board of Directors member Maria Kanellis-Bennett, words from just about every competitor in the tournament, and then all the important matches throughout the tournament. The coverage of the finals seemed a bit rushed, but they made sure to cover the important matches. You get some interesting insight from the competitors, most of it candid, but some in kayfabe (i.e. the Allure’s thoughts and opinions on Quinn McKay and Maria, and Amy Rose discussing Max The Impaler.) It’s put together really well, and I would say it is mostly designed for those who have not seen the tournament versus regular ROH viewers. However, as someone who did see the tournament in full, it was cool to see some backstage footage and hear how the competitors felt coming into the tournament and throughout the tournament as well. The stories you hear and the passion from everyone also makes you wish somehow everybody could have won the tournament simultaneously. This was fun and easy to watch, and a nice way to fill a week of TV moreso than simply re-broadcasting matches. I have nothing against that, but I’ll take fresh content over that every time.

Although this week’s episode featured no full wrestling matches, there was plenty of activity going on with ROH’s titles outside of the company this week. First, on the episode Impact Wrestling that aired the previous evening, the double title challenge Deonna Purrazzo made to Rok-C at “Final Battle” came to pass: 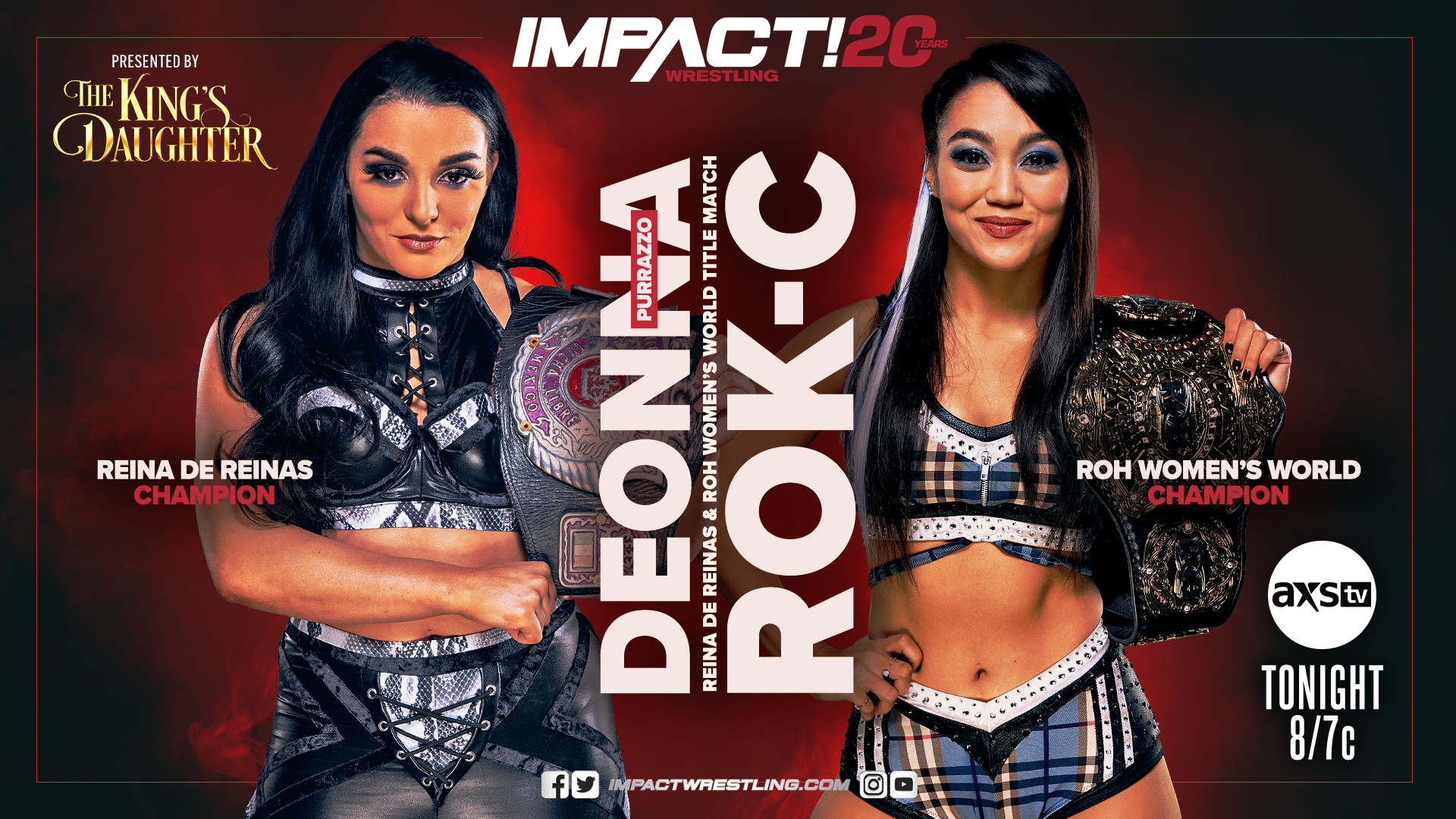 Rok-C has been the ROH Women’s World champion since 9.12.2021 and this is her ninth defense. Deonna has been the AAA Reina de Reinas champion since 8.14.2021 and this is her first defense. That gives you an idea of how seriously AAA takes its championships. Ian Riccaboni and Matthew Rehwoldt are on commentary for the bout, and Bobby Cruise handles the ring introductions. Rok-C goes for the Rok Lock early and Purrazzo uses the ropes to slip out of the ring. After the commercial, we see Rok-C duck a running boot and take down Purrazzo with a pair of armdrags. She then tornado clutches Purrazzo into the Rok Knees for two. When Rok-C has a hold of Purrazzo and runs up the ropes, Purrazzo shoves Rok-C to the floor, with her arm jamming against the top rope in the process. Purrazzo stretches Rok-C’s arm under the bottom rope and also kicks the rope into her pectoral muscle. Purrazzo pulls Rok-C to the mat in a double knuckle lock and uses her leg to snap Rok-C’s arm for a two count. Rok-C mares her way out of a straightjacket choke and avoids a tackle which sends Purrazzo shoulder first into the ring post. Rok-C takes down Purrazzo with a side Russian leg sweep for two, then puts the Rok Lock. However, Rok-C’s arm is too hurt to keep it applied. Purrazzo sweeps Rok-C into the Fujiwara armbar, which Rok-C escapes with a crucifix pin counter. She lands Code Rok for a close nearfall to Rok-C’s dismay. She goes for it again, but Purrazzo counters into the Fujiwara armbar. Rok-C turns that into the Rok Lock. Purrazzo turns it back around into the Fujiwara armbar. Rok-C refuses to give up, even grabbing Brian Hebner’s leg to stop him from calling for the bell. Purrazzo locks Rok-C’s other arm, and Rok-C verbally submits at 14:24, making Purrazzo the new ROH Women’s Champion. They did a great job making this a battle of submissions, with the crowd going wild each time the Rok Lock and Fujiwara armbar was applied or even teased. The nearfall from Rok-C’s Code Rok was also super well done, and the counters were super smooth. Purrazzo finally getting the title after her time spent in the original Women of Honor was a nice story, and Rok-C’s reign ended on a high note. ***¾

On Saturday night, Jonathan Gresham would put the ROH World Championship on the line in GCW against one of wrestling’s true innovators: 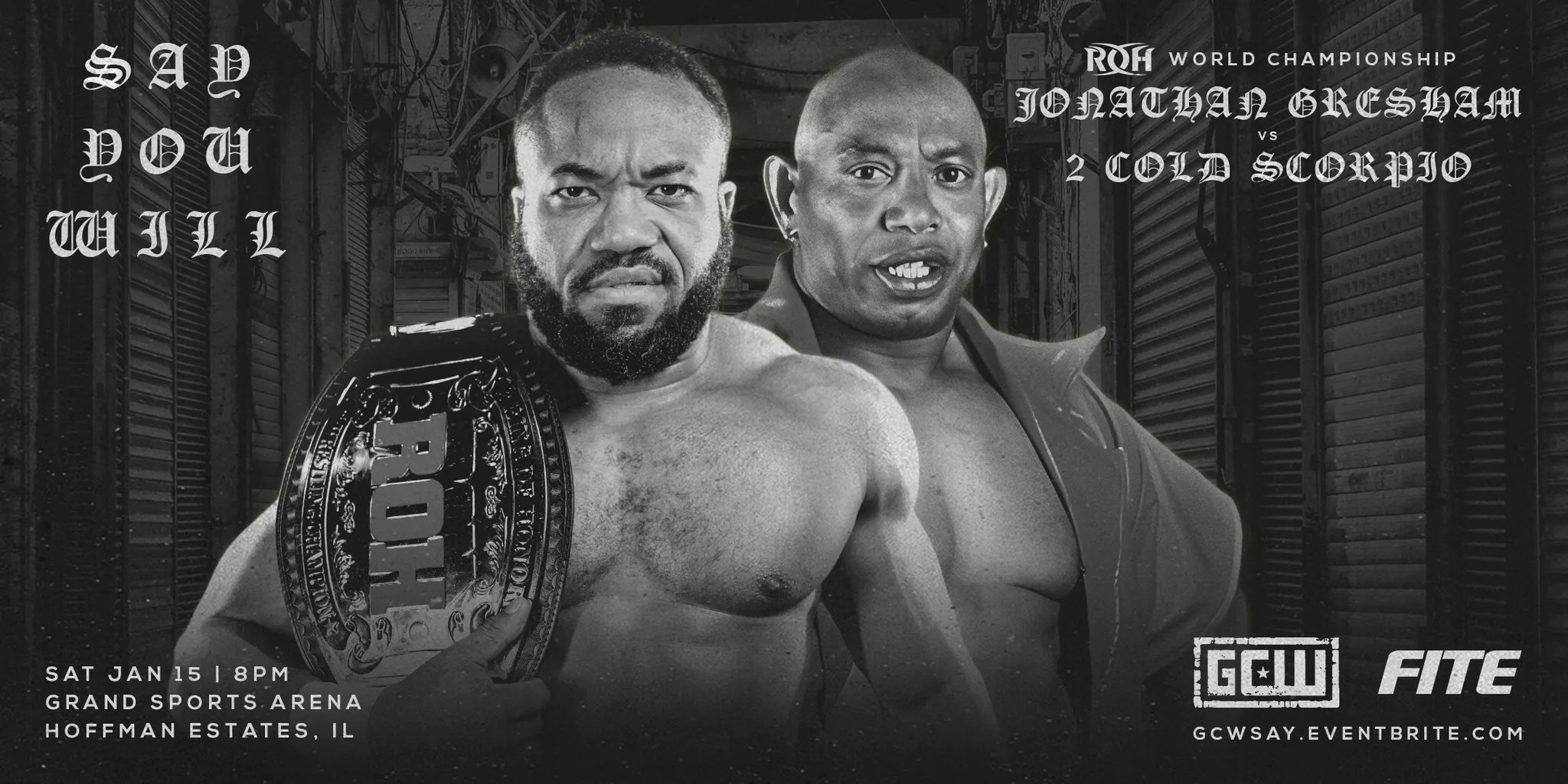 Gresham has been champion since 12.11.2021 and this is his fourth defense. Unlike his prior defenses, this one is NOT under Pure Rules. “Jungle Boogie” and “Sky High” is a pretty great theme music combo. Blake Christian who is set to challenge Gresham for the ROH World Title at GCW’s Hammerstein show on January 23rd is on commentary. After several minutes of exchanging holds on the mat, Scorpio kicks out Gresham’s left knee when Gresham reverses Scorpio’s handlebar stretch. He then attacks Gresham’s left shoulder. Scorpio also ends a chop exchange with a chop to the face. Scorpio gets a nearfall after a flipping double leg drop off the second turnbuckle. Scorpio absorbs a flurry of forearm shots from Gresham and then delivers some of his own. Gresham knocks down Scorpio with an enzuigiri and a release German suplex. A bridging German suplex only gets two as Scorpio’s left shoulder is off the mat. Scorpio rolls Gresham into the turnbuckles to escape a sleeper hold attempt. Scorpio calls for the 450 splash, but Gresham kicks his leg out and gets Scorpio in a grounded sleeper hold. Scorpio’s arm drops three times, and the referee calls for the bell at 13:58. I liked the story of Scorpio bringing the intensity when it was clear he couldn’t beat Gresham in grappling, and how taking his eye off the ball is ultimately what cost him the match. There was no chance he was winning, but with Christian on commentary and him shaking hands with Gresham after the bout, it was a solid way to add some flavor to that big match. ***

The inaugural TERMINUS event took place on Sunday, January 16th, run by current ROH World Champion Jonathan Gresham. Not only would Gresham defend his title on this event, but so would the champion he did not defeat:

Bandido technically never lost his ROH World Championship. Gresham won the “first” ROH World Title from Jay Lethal at “Final Battle” and they have been careful to never say Bandido was stripped of the title. For all intents and purposes Gresham is the ROH World Champion, but Bandido surely must disagree. He has been champion since 7.11.2021 and this is his fifth defense. Bandido goes for the 21 Plex just two minutes deep into the match. Black is able to evade that and Bandido’s X-Knee. Bandido does however pull off the Three Amigos. Black escapes a full body stretch and sends Bandido to the apron. Black then catches Bandido with an atomic drop when Bandido attempts a springboard attack, and suplexes him after the fact. Bandido ends a strike exchange with a leg lariat, then rolls Black off the apron and onto his shoulders for a Death Valley Driver. Black comes back with a powerbomb and a Texas cloverleaf. Bandido grabs the bottom rope to escape. Black uses the bottom rope to escape a pin as well, after a Dragonrana from Bandido. Black brings Bandido off the top with a butterfly superplex for two.Bandido escapes another cloverleaf attempt. He successfully nails the x-knee and the 21 Plex for the pin at 14:05. Bandido defeating Gresham’s best friend is a great way to get under the champ’s skin. Black did a really good job cutting the champion off and doing his best to tire him out, but what Bandido attempted early in the match eventually paid off in the end. This was a good way for Bandido to get reacclimated to this iteration of the ROH title scene. ***

Gresham has been champion since 12.11.2021 and this is his fifth defense. The Pure Rules are as follows:
*The competitors are to obey the “Code of Honor”, shaking one another’s hand before and after the match.
*Each wrestler has 3 rope breaks to stop submission holds and pinfalls. After a wrestler has used all 3 of their rope breaks, submission and pin attempts on or under the ropes by the opponent are considered legal.
*Closed-fist punches to the face are not permitted. Punches to other parts of the body are permitted, excluding low blows. The first use of a closed fist results in a warning, a second will be a disqualification.
*This match has a 60 minute time limit.

Gresham angers Alexander after a couple neck drags and a dropkick. Alexander takes Gresham down with a running boot and twists on his left ankle. He rolls Gresham into an ankle lock, and Gresham uses his first rope break to escape. Gresham quickly uses his second rope break to escape a half crab with a lot of torque on the ankle. Gresham dropkicks Alexander’s knee out and locks him in a figure four, forcing Alexander to use his first rope break. Gresham uses the ropes to pull off a headscissors. He goes for the figure four again, and Alexander cracks him with a closed-fist to stop Gresham, earning Alexander a warning. Gresham escapes a double underhook and takes Alexander down with a dragonscrew leg whip. He catches Alexander in a crucifix pin. Alexander boots Gresham after kicking out, then catches Gresham’s lionsault press and drops him with a tombstone piledriver for two. A forearm exchange ends with Alexander ducking an enzuigiri from Gresham and putting him in an ankle lock. Gresham frees himself by kicking Alexander’s hands. Alexander hesitates when he almost uses a second closed fist to stop a drop toe hold. He is able to nail Gresham with a forearm strike and give him a double underhook piledriver. Gresham uses his third and final rope break to prevent the pin. Alexander stomps Gresham’s ankle and re-applies the ankle lock. Gresham rolls his way free. He rolls Alexander into a figure four, which Alexander blocks by twisting on Gresham’s left ankle. He puts the ankle lock back on. Gresham uses the ropes to pull Alexander throat-first into the top rope. Alexander however slingshot superplexes Gresham. They lock their legs, resulting in a double pin at 16:52. The referee calls this match a Draw, meaning Gresham is still the ROH World Champion. I can’t get too excited over a draw, especially as the main event of the first show for a new promotion. However, the wrestling was really good, so it at least delivered in that sense. Josh Alexander is so friggin’ good. ***¾

Bandido confronted Gresham after this match, but before anything of note was said or done in regards to cleaning up this double champion situation, Santana of Proud and Powerful/LAX came out to challenge Gresham for the ROH title at the second TERMINUS show. All Gresham told Bandido was “his time will come” and Bandido just kind of accepted that? Nothing formally was established or solidified with this ROH title situation which is disappointing. Ideally we’ll get a Gresham vs. Bandido title match at Supercard of Honor (which is now officially happening!) to settle things up.

Next week’s episode will be the first of two back-to-back episodes to feature matches from Final Battle 2021, but Gresham has two ROH World Championship matches lined up this upcoming week as well: vs. Steve Maclin in Impact Wrestling, and vs. Blake Christian in GCW.