Jonathan Gresham made his second defense of the ROH World Championship the night after his first defense: 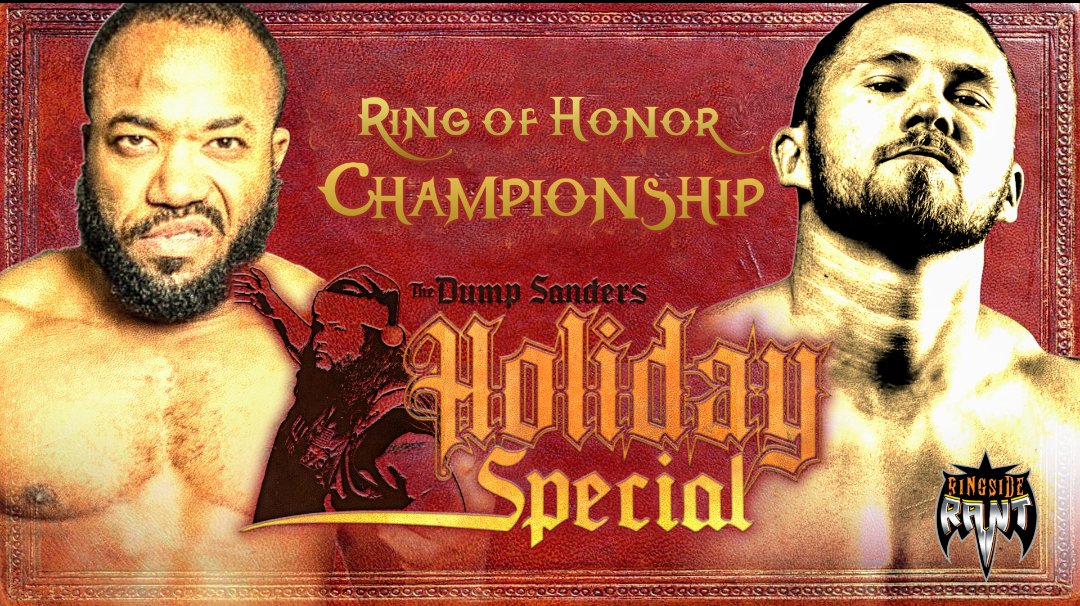 Gresham has been champion since 12.11.2021. Priest is the current New South Heavyweight Champion, and he defended the title earlier in the evening. Their only other singles match occurred this past Summer at IWTV’s “100”, which Gresham won. The Pure Rules are as follows:
*The competitors are to obey the “Code of Honor”, shaking one another’s hand before and after the match.
*Each wrestler has 3 rope breaks to stop submission holds and pinfalls. After a wrestler has used all 3 of their rope breaks, submission and pin attempts on or under the ropes by the opponent are considered legal.
*Closed-fist punches to the face are not permitted. Punches to other parts of the body are permitted, excluding low blows. The first use of a closed fist results in a warning, a second will be a disqualification.
*This match has a 60 minute time limit.

Surprisingly, Priest forces Gresham to use a rope break first, utilizing a form of a heel hook to do so. Gresham snaps Priest’s ankle with a dragonscrew leg whip in response. Priest manages a kneeDT, but Gresham trips him down into a Bow and Arrow, which Priest quickly turns into a lateral press. Gresham scores big with a stomp to Priest’s left shoulder, then traps his right shoulder behind his leg and outstretches his ankle. Priest escapes on his own but is clearly weakened. Priest open hand strikes Gresham in the face and chops him in the corner. Gresham and Priest get into a slap fight, ending with both men falling to the mat. Gresham shoulder tackles Priest, but Priest comes back with a dropkick. Gresham maneuvers Priest into an Octopus Stretch, and Priest falls into the ropes to escape, using his first rope break. Priest wins a second chop battle, but Gresham muscles him into a suplex. They tire one another out by switching positions and chopping one another in the corner, but once again, Priest comes out on top by straddling Gresham onto the top turnbuckle. He superplexes Gresham, and upon landing, Gresham locks his feet to get a two count with a small package. A second small package and a backslide also get him two counts. Priest pulls Gresham down into a headlock. Gresham headscissors Priest and pulls his legs forward to pin him at 16:34. This was a big improvement over the AJ Gray defense from the night earlier. Priest is a much better fit for Gresham and the Pure style at large and it was nice seeing an audience actually care about the wrestling going on. ***¼

There was no match on the December 21st episode Week By Week, but the December 22nd episode of Women’s Division Wednesday featured a division debut:

Max The Impaler vs. Delmi Exo

Chelsea Green is on commentary for this bout and Amy Rose is in Max’s corner, as per usual. Exo has competed once for ROH before in a Dark Match, but this is her singles debut and first match since the Women’s Division relaunch. Max mauls Exo for a while, but Exo catches them with a leaping neckbreaker for two. Exo fails to keep a crossface applied. She goes for a running crossbody and Max catches her with a backbreaker. Max hits Welcome to the Wasteland for the pin at 4:35. Another dominant win for Max, which is always a good thing. Exo being a similar height to Max made her feel like someone who actually gave Max some competition, so Max’s win felt like more of an achievement than their usual steamroll efforts. *½

Exo’s sister Ashley Vox checks on her after the match. The Allure of Angelina Love and Mandy Leon make their way out. Leon brags about defeating Max before passing the microphone to Leon, who offers Vox and Exo a tag team match as an opportunity to make a name for themselves right now. Before Vox and Exo can express how ridiculous this is, they attack Exo and Vox and make referee Jake Clemons ring the bell.

Of course the Allure isolate Exo, but Exo is able to send Leon and Love crashing into one another and tags in Vox. She lays both of them out with a double dropkick. After a series of shots, she wipes out Love with a headbutt and Leon with a rolling clothesline. Leon goes to Vox’s eyes before dropping her with a neckbreaker. Vox finds herself trapped in the Allure’s half of the ring until she escapes a suplex attempt from Leon, shoves Leon to the corner, and tags Exo. Exo is still showing some wear as she Northern Lights suplexes Love. Vox tags back in for a stunner/superkick combo to Love. Vox kicks Love into a side Russian leg sweep from Exo. Leon tosses Vox outside and Love blasts Exo with the Botox Injection for the pin at 6:01. Solid tag match. I wish the Sea Stars came back to ROH way earlier so they could have been more involved prior to the hiatus. **¼

This is a teacher versus student battle, and is a first time singles match between the two, not counting the Pure Rules Gauntlet on Episode 522. Pure Rules are as follows:
*The competitors are to obey the “Code of Honor”, shaking one another’s hand before and after the match.
*Each wrestler has 3 rope breaks to stop submission holds and pinfalls. After a wrestler has used all 3 of their rope breaks, submission and pin attempts on or under the ropes by the opponent are considered legal.
*Closed-fist punches to the face are not permitted. Punches to other parts of the body are permitted, excluding low blows. The first use of a closed fist results in a warning, a second will be a disqualification.
*This match has a 15 minute time limit. If the time limit expires, three judges will determine the outcome.
*Any wrestler who interferes will be automatically terminated from the roster.

Delirious intentionally keeps his composure at the bell. A wristlok exchange sees CB wristdrag Delirious to the corner. Delirious evades a running shotei, but is taken down by an armdrag and a trip into a leg submission. Delirious uses his first rope break to escape. CB uses Delirious’ handshake offer to tornado clutch him back into a leg hold, and Delirious spends his second rope break. Delirious is unhappy CB abused his handshake offer and hits him with a forearm strike. Delirious then knocks CB down with a back elbow. Delirious gets CB in a half crab, and CB uses his first rope break. They fight on the ring apron where Delirious gives CB a backbreaker onto the ring frame. Back in the ring, CB uses his second rope break to fight his way off of Delirious’ shoulders. CB’s back is too hurt to pull off a suplex initially but fights through the pain and gets it when he tries again. CB bulldogs Delirious’ shoulder and kicks it out before rolling Delirious into a short arm scissors. Delirious rolls CB multiple times, and while CB doesn’t release, Delirious gets close enough to the ropes to use his third and final rope break to escape. He sends CB outside where CB meets him with a superkick and a springboard tornado DDT! In the ring, CB lands a top rope double stomp for two. Delirious is able to maneuver CB into a Cobra Clutch attempt. CB attacks Delirious’ left arm, but Delirious Judo throws CB into a 2k1 brainbuster. He gets CB in the Cobra Clutch, and CB uses his third and final rope break to escape. Delirious hits the Panic Attack and the Bizarro Driver for two. With one minute remaining, Delirious dumps CB on his head with a Cobra Clutch suplex. CB comes back with three Dragon suplexes and the Shotei for two. He then locks on the short arm-scissor, and Delirious taps out at 14:55. After the match, Delirious unmasks, but places a towel over his head so he cannot be seen, and gives the mask to CB. CB and Delirious embrace and shake hands. That was a very touching moment and a really good match to boot. It was really great that CB finally bested his trainer before this era ended, and I am glad a match with this significance was featured as its own upload. ***½

Rok-C has been the Women’s World champion since 9.12.2021 and this is her ninth defense. Holidead won a four way match at “Honor For All” to earn this title shot. Maria Kanellis-Bennett is on commentary for this bout. Holidead’s size advantage allows her to control Rok-C in the opening. When Rok-C is close to getting the Rok Lock on, Holidead uses the ropes to escape, but Rok-C manages to build momentum off of that moment. Holidead shuts her down when she catches Rok-C’s suicide dive attempt and drives her back first into the ring post. During the commercial, Holidead used the ring apron to do more damage to Rok-C’s back. Rok-C is able to shut down Holidead with a Thesz Press back in the ring. She leg sweeps Holidead into Rok Knees for two. Holidead swings Rok-C into a Complete Shot for two. She goes for Darkness Falls, but Rok-C counters with a back cracker and a knee strike to the chin. Code Rok does the trick, getting Rok-C the pin at 13:30. Nice for Rok-C to get a win over a bonafide women’s veteran and someone who was part of the first Women of Honor title tournament too. ***

Woods and Johnson are the team captains and they drew the names in an earlier segment without revealing the names to us. These matches are always a blast, but this felt particularly special as it was the final TV match of this era of ROH. As such, I think they did a tremendous job with the teams. You had people who have been with the company since the very first show (Briscoes and Homicide), reunions of teams (the All Night Xpress and 2 Guys, 1 Tag), tons of former and current champions, and both the Pure and Lucha styles being showcased, which really were the two unique styles that highlighted this era of Ring of Honor. You got nods to rivalries past, and even some current day ones such as Silas and Horus going at it on the floor. It was also the first time former World Champions Homicide and Matt Taven wrestled each other. Appropriately it was the Briscoes who won the match for their team, pinning Brian Johnson with the Doomsday Device at 20:45. I’ll sorely miss Ring of Honor weekly, but this was a super fun and optimistic note to go out on. ***½

Overall: The last episode of the year with fresh matches was a good one and worth checking out, especially the main event.

Next Week: The final ROH episode of 2021 features three of the best PPV/HonorClub exclusive bouts of the year.