The September 14th Week by Week featured an unreleased Six Man Tag Team Championship defense from MCW this past July: 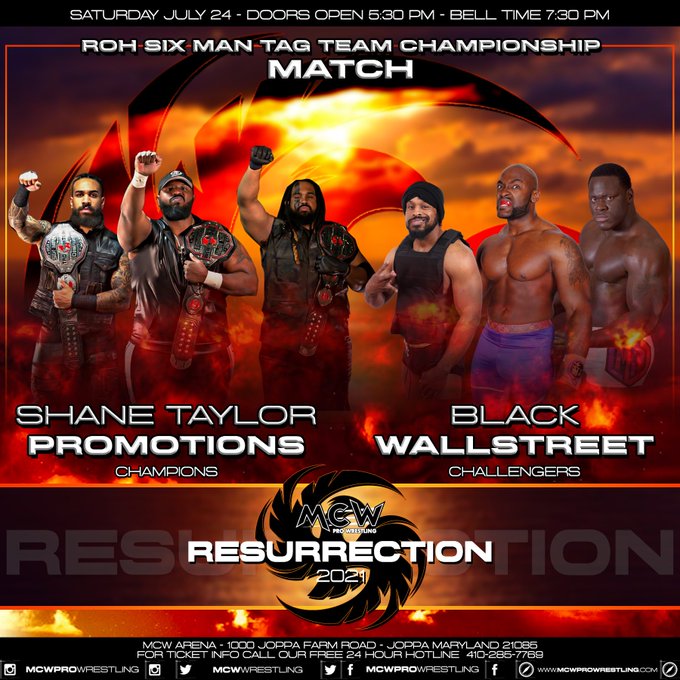 Shane Taylor Promotions have been champions since 2.19.2021 and this is their fourth defense. O’Shay Edwards is standing in for Kaun. Both teams brawl around the ring. Bomb takes down Moses with a dropkick back in the ring. Lennox’s speed allows him to rattle Taylor with a couple dropkicks and an enzuigiri. Taylor however drops him with an STO when he comes charging to the corner. Prime and Edwards are too stubborn to stop fighting, even when neither man won’t budge, resulting in their own partners having to tag themselves in. Bomb dropkicks Taylor and takes him to his corner. Taylor escapes with a knee to Bomb’s face. Edwards splashes Prime and Bomb repeatedly in opposite corners. Lennox stops him with a slap and ends up being rammed into Prime and Bomb repeatedly before being slammed. Moses tags in and gets chokeslammed by Prime. Taylor headbutts Prime and Bomb gives Taylor an elevated neckbreaker. Taylor gives Bomb a Rydeen Bomb. Lennox shotgun dropkicks Edwards and lands a top rope splash. Moses scoops up Lennox into a swing-out Complete Shot for the pin at 8:50. This was my first time seeing everyone in Black Wallstreet and thought they all did well in their roles. I appreciate seeing title defenses like this in different environments, and it totally fits the spirit of STP’s take on all comers approach for them to defend them outside of the organization. **½

Speaking of titles being defended in different environments, just a couple of days later, a tweet from PJ Black alerted me of a Big Lucha show which featured an ROH World Championship match. Fortunately, that show was filmed and put on YouTube:

Bandido has been champion since 7.11.2021 and this is his third defense. I am surprised and relieved that ROH actually went out of their way to explain why Taven still got a title shot even though he lost his championship rematch last month against Vincent. It’s a bit of a lazy explanation, but acknowledgment and some sort of logic is always preferred to ignorance.

Bandido looked to put this one away early, getting a nearfall with a Code Red and another after a Fosbury Flop and twisting crossbody in the ring. Taven was able to block the 21 Plex and grabbed the referee’s shirt so he could low blow Bandido without him noticing. The Rudo behavior would continue with Taven sending Bandido sailing into several rows of chairs and ripping at his mask. Bandido had Taven taken down with a huracanrana and a crucifix driver, and Taven kicked out of both. Taven took him down with a spin kick, but missed a moonsault after jaw jacking with someone I can’t identify. Bandido hits the X-knee but Taven grabs the bottom rope to avoid being pinned. Despite Bandido diving on him twice, Taven cuts off Bandido in the ring as he comes in with a dive off the top with a mid-air dropkick. Bandido uses the ropes to escape a crossface and then gets another nearfall with a Dragonrana. Taven rolls through a sunset flip, hitting Just The Tip and then a frog splash for two. Taven goes for the Climax. Bandido counters by shoving Taven to the ropes and hits the 21 Plex for the pin at 16:02. This crowd was very hot for Bandido, which checks out as I believe this is his promotion and building where this show took place. The tale of Taven avoiding the 21 Plex early and it serving as his demise later on was beautiful in it’s simplicity. The action was also quite exciting, but with no build up and no question as to who was winning as a regular ROH viewer, it did take away some of the atmosphere. Still, for a surprise inconsequential title defense, this was very fun. ***

Now onto this week’s episode, in which Pure Wrestling gets the spotlight, celebrating one year ago when the Pure Division was relaunched and reset the tone for the promotion.

Every match in the Pure Rules Gauntlet match is contested under Pure Rules. Pure Wrestling Recent addition to the Pure Division Brian Milonas joins commentary, salty he is not in the match. The rules for the gauntlet are as follows:
*The competitors are to obey the “Code of Honor”, shaking one another’s hand before and after the match.
*Each wrestler has 3 rope breaks to stop submission holds and pinfalls. After a wrestler has used all 3 of their rope breaks, submission and pin attempts on or under the ropes by the opponent are considered legal. Rope breaks do not reset between matches.
*Closed-fist punches to the face are not permitted. Punches to other parts of the body are permitted, excluding low blows. The first use of a closed fist results in a warning, a second will be a disqualification. Warnings do not reset between matches.
*Each match has a 15 minute time limit. If any match goes past the time limit, three judges will determine the outcome.
*Any wrestler who interferes will be automatically terminated from the roster.

Martin by instinct uses the ropes to avoid a drop toe hold. It makes him angry that this counts as a rope break. CB forces Martin to use his second and third rope break quickly, which makes CB laugh. Martin kicks CB to the floor and muscles him around back in the ring, but CB ends up bringing him down in a knee-assisted chinlock, resulting in Martin tapping out at 3:13.

The World Famous CB vs. Delirious

LSG struggles to keep the Cobra Clutch off, needing to use his first rope break to escape. Delirious thrusts his head into LSG’s abdomen. LSG retaliates with a chin breaker. He hits a springboard forearm strike for two. Delirious halts LSG in the corner and dropkicks him to the opposite corner. He drops LSG with a 2k1 Bomb for two. LSG drops Delirious onto his face and puts him in a Muta Lock. He adds a half-straight jacket choke and Delirious taps out at 5:20.

LSG defeated Keys in a regular singles match on Episode 506. Keys gives LSG three backbreakers in a row. LSG is able to fiercely hip toss his way out of an abdominal stretch. LSG also avoids a Boston Crab. Keys counters a suplex from LSG into another backbreaker and then successfully applies the Boston Crab. LSG uses his second overall rope break to escape. LSG uses his third and final rope break to escape Keys’ waistlock after taking three consecutive German suplexes. Keys tries a superplex. LSG in mid-air switches to a press, crashing onto Keys as they land on the canvas. This gets LSG the pin at 4:37.

This is Johnson’s first Pure Rules match since November of 2020 (Episode 477). LSG nails him with a springboard forearm strike and then swings Johnson into Rocket Bye Baby. LSG lands the Saintsplosion, and Johnson uses his first rope break to stop the pin. Johnson uses a closed first on LSG and then uses the leverage of the ropes to pin LSG at 1:05, and to win the Gauntlet at 19:47 total. That was a total wet fart of an ending, but the wrestling in the previous falls was all very good. I just have no interest in Johnson in the Pure division at all. **¾

Titus’ stablemate Tracy Williams joins commentary for this bout. The Pure Rules are as follows:
*The competitors are to obey the “Code of Honor”, shaking one another’s hand before and after the match.
*Each wrestler has 3 rope breaks to stop submission holds and pinfalls. After a wrestler has used all 3 of their rope breaks, submission and pin attempts on or under the ropes by the opponent are considered legal.
*Closed-fist punches to the face are not permitted. Punches to other parts of the body are permitted, excluding low blows. The first use of a closed fist results in a warning, a second will be a disqualification.
*This match has a 15 minute time limit. If the match goes past the time limit, three judges will determine the outcome.
*Any wrestler who interferes will be automatically terminated from the roster.

Titus has a wrap on his left quadricep. In a headscissors he pushes Bennett to the ropes, tempting him to use a rope break, but Bennett fights out on his own accord. He lures Bennett to the ropes again in an abdominal stretch, and when Bennett won’t comply, Titus schoolboys him for a two count. Bennett does use his first rope break in a high angle Boston Crab which pleases Titus. Bennett holds the ropes to avoid a dropkick. He grabs Titus’ arms for the London Dungeon. Titus twists and goes for a belly-to-belly suplex off the ropes. Knowing what’s coming, Bennett hooks his arm around the rope to stop the suplex, which Todd Sinclair rightfully acknowledges as Bennett’s second rope break. Bennett knocks Titus loopy with a rolling forearm. When Bennett swoops in for a pin, a rocked Titus has the wherewithal to use his first rope break to avoid the pin, but it takes a moment for him to get to his feet. When he does, Bennett attacks Titus’ left quadricep. During the commercial break, Titus clobbered Bennett with a dropkick. He hits two yakuza kicks and goes for a pin, which Bennett spends his third and final rope break to prevent. Titus stretches Bennett’s neck in the middle rope before giving him a gutwrench suplex for a two count. Bennett pulls Titus down off of the top rope and into an ankle lock, which Titus uses his second rope break on for escape. Titus pulls Bennett into a cradle to stop Bennett’s figure four attempt. Bennett shoves Titus to avoid a belly-to-belly suplex and dropkicks Titus’ bad leg out from under him. With one minute left in the time limit, Bennett kicks Titus in the back of his leg to win the fight for a backslide. Titus uses one leg to push himself up and fireman’s carry Bennett. They knock each other down with stereo clotheslines and the 15:00 time limit expires. The judge’s decide in Bennett’s favor 2:1 due to landing more strikes, but commentary questions the call, as it is noted that Bennett used all of his rope breaks. These two had really tremendous chemistry and told such a good story, with Titus wanting to get rid of Bennett’s rope breaks as fast as possible, and Bennett attacking Titus’ hurt leg. The judge’s decision was a bit of a cop-out. Now that we have Woods as champion, either guy winning would’ve been a great way to propel them up the ranks with more momentum behind them than a draw would. Bennett had a great match with Gresham at Best in the World, but seeing how well he did with Titus solidifies him as somebody I am happy to see stay in the Pure Division. ***¼

Overall: What a weird choice to have your Pure Rules spotlight episode have a Gauntlet that ends with a borderline joke winning the match and your main event end with a judge’s decision. If you like this style of wrestling there is plenty of good stuff, but I don’t think this highlighted the Pure Division in the best light possible.