2022 has not been kind to the holders of the IWGP United States Championship. KENTA was injured at Wrestle Kingdom 16 where he unsuccessfully defended the championship against Hiroshi Tanahashi. Tanahashi lost in his first defense to SANADA, who would relinquish the title before making a single defense due to an orbital fracture. The vacant title would be won by Hiroshi Tanahashi, who once again lost in his first defense to Juice Robinson. Robinson then was struck with appendicitis. To recap: anyone who isn’t Tanahashi got injured, and Tanahashi couldn’t make one successful defense.

New Japan’s rule with title defenses is if the champion cannot make an advertised title match, for whatever reason, they are stripped of the title. Despite Juice Robinson making it known in advance he would not be at Dominion, even before injury, New Japan booked him in a triple threat match against Will Ospreay and former champion SANADA. Chris Charlton on commentary makes it known, however, Robinson has antibiotics and has been cleared to wrestle, with paperwork signed by Juice for this match. That’s kind of an interesting wrinkle to this tale. With Robinson not here to compete, the title was vacated, and the two challengers would fight for the vacant title. However, Robinson is still in possession of the title belt itself:

SANADA takes the early advantage with a pescado. Ospreay avoids the Paradise Lock and takes down the former champion with a Hot Shot and big boot. Ospreay wasn’t afraid to use a backbreaker, or even an eye rake, to stop SANADA when he started making a comeback. SANADA gained momentum when he dodged a back handspring attack, Ospreay’s knee buckled upon landing, and SANADA instantly dropkicked the bad knee out from under him. SANADA successfully got the Paradise Lock applied and dropkicked Ospreay. Ospreay was sent to the ropes, and this time pulled off the back handspring kick successfully. Ospreay then landed a Sky Twister press to the outside. Pip Pip Cheerio gets Ospreay a nearfall back inside. After avoiding the Paradise Lock, Ospreay hook kicked SANADA and nailed the OsCutter for another nearfall. SANADA escaped a Storm Breaker and delivered a TKO before pinning Ospreay with a Tiger Suplex for two. Ospreay gets his knees up to block a Muta Moonsault and clobbers SANADA with the Hidden Blade for two. After kicking out of an O’Connor Roll, Ospreay blasts SANADA with a second Hidden Blade and the Storm Breaker to win the title at 12:50. This is a match where the wrestling was good, but it felt empty. Little was made of SANADA’s previous injury, and the attack on Ospreay’s leg went nowhere. I also got the sense the audience didn’t really care about the match, and I can’t blame them. It’s also weird that Ospreay wins and yet there’s no title belt, not even a facsimile, to present him for winning the bout. A strange, disappointing match. ***

Will Ospreay would then appear on Dynamite three days later, continuing the rivalry between United Empire and FTR with a singles contest:

Harwood pulled Ospreay to the apron for a brainbuster. Ospreay tripped him after escaping, and Harwood’s knee that’s in a brace collided with the apron on the way down. Ospreay then shotgun dropkicked Harwood into the ring steps before bringing Harwood back into the ring. Harwood hip tosses his way out of an abdominal stretch. Harwood repeatedly German suplexes Ospreay, and after a big release variation goes for a diving headbut. Ospreay avoids it, and then lands a springboard 450 Splash for two. Hawood catches Ospreay on the top rope, but Ospreay twists in mid-air to land on Harwood, countering a superplex. Harwood impressively reverses Ospreay’s pin attempts, and then rolls to the apron for a breather. Unfortunately, Ospreay wipes him out with a pescado and Pip Pip Cheerio to the back of the head. Harwood catches an OsCutter and bounces him back first off of the top rope for a sit-out powerbomb. Ospreay is able to give Harwood one of his out after avoiding a short arm clothesline. The OsCutter connects after that, but only for a two count. The Hidden Blade right after does the trick, giving Ospreay the pin at 13:43. I saw people calling this a “styles clash”, but with the style Ospreay has wrestled since becoming a heavyweight, this was a more even pairing then people expected. Regardless, it was super fun and really good. The fact that a career tag team wrestler had believable nearfalls against one of the most decorated New Japan singles wrestlers says it all. ***¾ 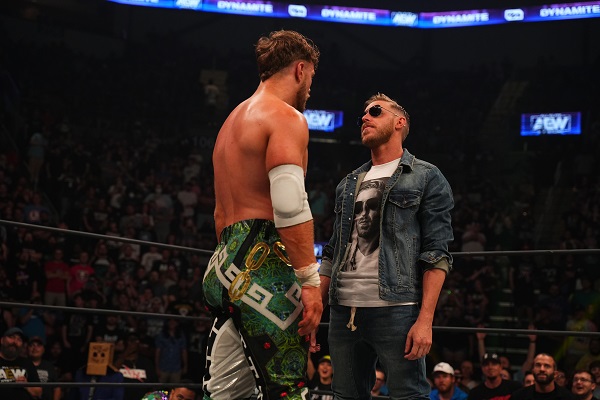 The rest of the United Empire made their way out after the match, and Cash Wheeler, Rocky Romero, and Trent Beretta followed to help even the odds. Orange Cassidy then made his return to AEW from injury to help his fellow CHAOS brethren. Cassidy and Ospreay stared each other down in the middle of the ring, and Ospreay left when FTR and Roppongi Vice appeared behind Cassidy. It was announced later in the show that Cassidy would challenge Ospreay for the IWGP U.S. Title at “Forbidden Door.” On Rampage, a “Winner Takes All” triple threat tag team match between FTR, Jeff Cobb & Great-O-Khan, and Roppongi Vice was made, with the ROH and IWGP Tag Titles both on the line. 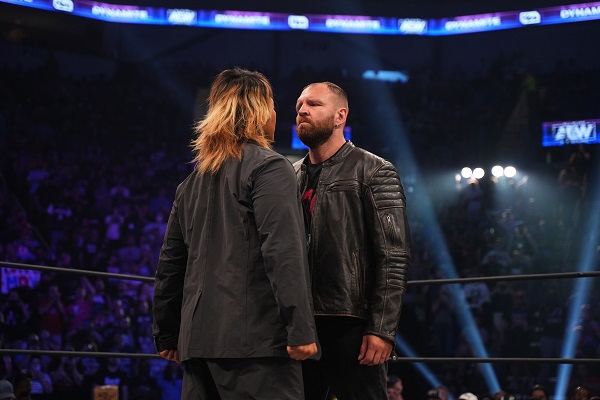 Speaking of the “Forbidden Door”, the main event is set: Jon Moxley vs. Hiroshi Tanahashi for the Interim AEW World Championship. On Dynamite, Chris Jericho, Sammy Guevara, and Tay Conti interrupted a face-to-face between Jon Moxley and Hiroshi Tanahashi. Jericho sicked all of the Jericho Appreciation Society on them, as well as two members of Suzuki-gun, Lance Archer and El Desperado. Jericho officially adds Guevara and Tay to the JAS, and says Archer and Desperado are on loan from Minoru Suzuki. Jericho then announces that himself, Guevara, and Suzuki will face Eddie Kingston, Wheeler YUTA & Shota Umino at “Forbidden Door.” That’s a Mad Libs match for you. Later, Adam Cole and Adam Page argued over who would wrestle Jay White at “Forbidden Door” for the IWGP Heavyweight Championship. It led to White sneak attacking Page and dropping him with the Blade Runner and cutting a promo that gave no further information as to who would wrestle him in Chicago. A four way with the three of them and Okada seems likely.

Coughlin debuted his new “Android” character on this show. He comes out in a metal mask and armor that looks like it was taken by Jesse Ventura in Running Man. It rightfully received ridicule online – hopefully it gets better over time. The match was centered around Kratos and Coughlin, as Kratos wants a rematch against Coughlin, who defeated him in his final match before graduating from the LA Dojo. Coughlin wiped out Kratos with a belly-to-belly suplex and a pescado. The other four members of the match slugged it out in the ring after the fact. Nelson and Isaacs took out Knight with an assisted German suplex, and a Sick Kick/Brainbuster combo led to Isaacs pinning DKC at 9:21. Coughlin and Kratos had to be separated after the bell. Lots of very good tandem wrestling surrounded the central issue, and I especially liked how the Dojo team performed like a well-oiled machine as a threesome. **¾

This is Delirious’ second only stand-alone New Japan appearance, competing in the New Japan Rumble at Wrestle Kingdom 12 in 2018. Daivari could not seem to get in any offense, and it took both a neck snap on the top rope and pulling Delirious down by his mask to get a jumping neckbreaker. Delirious paid him back with a finger bite as Daivari worked over his neck further. Daivari stuffed Delirious with a DDT, but after jaw jacking too much, Delirious took him down with a leaping clothesline. Daivari escaped a Cobra Stretch and took down Delirious with a uranage slam. Delirious pulls off the Cobra Clutch backbreaker and then holds on for the submission, but Daivari rolls Delirious up onto his shoulders to escape and blasts him with a superkick. The hammerlock lariat then gets Daivari the pin at 10:15. So Daivari is firmly a bad guy now and gets a win – but where is this going? Daivari is off more shows than he’s on, and his matches are average, so his trajectory is something I have trouble caring about or seeing a big picture for. I was glad to see Delirious, though, but I don’t know if Daivari beating him means anything to the STRONG audience at large. **¾

Brody King vs. Jake Something

This is Something’s NJPW debut. He’s a Michigan native who wrestles primarily in the Midwest, but competed on Impact late last year and early this year, and has recently popped up on AEW Dark. King is coming off a big victory over Minoru Suzuki at “Capital Collision.” Something is strong enough to stagger King, but King’s overall size advantage gave him a significant advantage. That, and being in AEW. But in all seriousness, Something looked very formidable against King, and they even spent the match building up to him giving King a sit-out powerbomb. The crowd was into the match, and King winning felt like something he had to work hard at earning. A lariat and Ganso Bomb got King the pin at 8:27 ***

For obvious reasons, I don’t feel great watching or reviewing this match. It was announced before all the allegations against Dickinson came through, and while I was hoping the match would be altered, canceled, or at the very least not aired, New Japan doesn’t function that way it seems. The crowd gave him close to NOTHING during his entrance. A cursory applause or cheer here or there, but the (possibly intentional) disinterest was overwhelming. Dickinson worked over Tanahashi’s leg. Tanahashi busted out his usual arsenal to fight back, pinning Dickinson with the High Fly Flow at 13:15. Tanahashi played the hits and gave Dickinson a mid match. I don’t blame him. ***

This week’s XTRA match was Fred Rosser facing the West Coast Wrecking Crew at STRONG #90. The match is whatever, but it’s good to watch as it shows the setup to Lawlor vs. Rosser III, which is airing this Saturday. I am really looking forward to that.