The road to the Forbidden Door PPV continued on the June 8th episode of AEW Dynamite, as David Finlay make his debut against a former AEW World Champion: 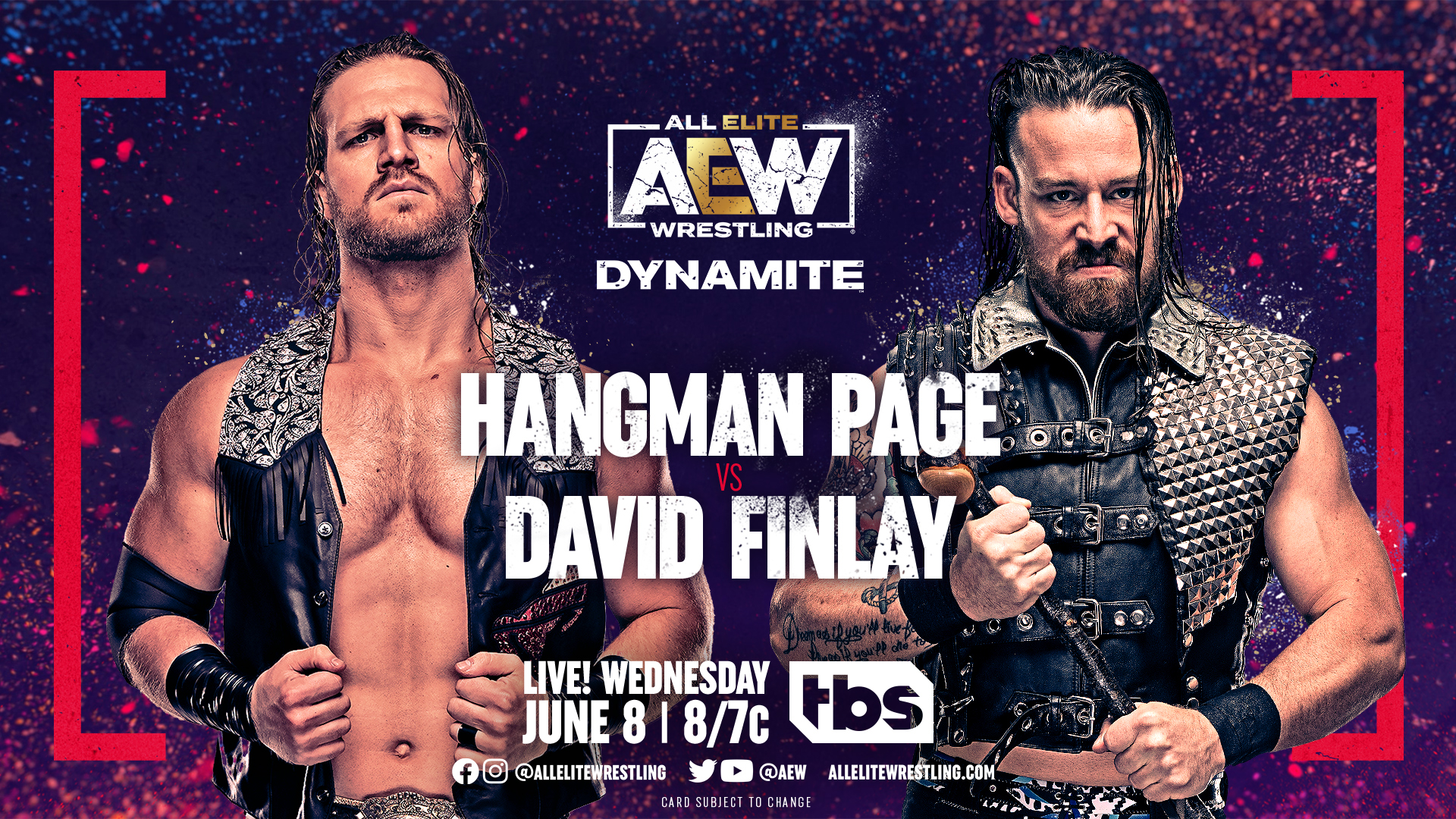 Finlay had solid control of Page on the mat, but Page drove him into the barricades with a suicide dive to firmyl turn the match in his favor. Back in the ring, however, Finlay caught a corner boot, drove Page’s leg into his shoulder, and then took out the same leg with a chop block. During the commercial break, Finlay pulled a page out of his fathers book, trapping Page in the ring skirt and pummeling him. Finlay then goes back to attacking Page’s leg, including bodyslamming him leg first into the ropes. After the break, Page takes down Finlay with a fallaway slam after catching his running crossbody. Page wiped out Finlay with a pescado. Finlay blocked the Deadeye and delivered a uranage backbreaker to Page for two. A cut appears under Finlay’s eye as he nails a running uppercut. Page rolls through Finlay’s crossbody, which Finlay turns into a small package for two. Page takes out a charging Finlay with a desperation clothesline, and pulls off the Buckshot Lariat for the pin at 10:23. Finlay hanging with a former World champion was a fantastic introduction for him in AEW. It’s a shame that Dynamite is packed so tight they can’t let moments breathe, and Page had to move on to challenging Okada right away without Finlay getting some love. Regardless, this was a very good match that I wish wasn’t be gobbled up by picture and picture. ***¼

Earlier in the show, Trent Baretta challenged FTR to a rematch for the ROH Tag Team titles due to the United Empire’s interference during FTR’s defense against Roppongi Vice. FTR then came to the ring, with Harwood telling Trent that his issue should be with Will Ospreay’s “bitch boys” and not them. Will Ospreay himself then came out, and from behind Aaron Henare and Aussie Open attacked Trent and FTR. Ospreay then left Trent lying with the Hidden Blade. This lead to a trios match on Friday’s episode of Rampage:

Aaron Henare is in the United Empire’s corner. After Beretta sends Ospreay to the floor with a tornado DDT, a donnybrook between FTR and Aussie Open breaks out. Fletcher and Davis are pitched outside, and Beretta lands an Asai moonsault onto all three members of the United Empire. Beretta nurses his knee as he begins to ascend the ropes. Ospreay sweeps out Beretta’s leg so that the back of his head collides against the top turnbuckle. During the picture in picture, The United Empire beat down Beretta in their corner as FTR watches intently. Back from break, Beretta backdrops Ospreay and enzuigiri’s Fletcher. Davis ducks an enzuigiri and lands a senton splash to prevent Beretta from tagging out. He also knee strikes Wheeler off of the ring apron. Fletcher misses a flying boot in the corner, crashing to the mat and enabling Beretta to tag in Harwood. Harwood unloads with strikes onto Aussie Open and nails Ospreay with a short-arm clothesline. Wheeler powerbombs Fletcher into a German suplex from Harwood for a two count. Wheeler took out an interfering Ospreay, but the distraction enabled Aussie Open to pull off a tandem Ace Crusher, and Ospreay to follow up with a springboard 450 splash. Beretta breaks up the pin. Ospreay takes out Wheeler with the OsCutter, and Wheeler amazingly kicks out from the pin. Wheeler tags in Beretta, who takes out Fletcher with a clothesline. Ospreay wipes out FTR with a pescado. Fletcher tries to sneak in a schoolboy pin on Beretta to no avail. Fletcher goes for a powerbomb, which Beretta counters with the Dudebuster for the pin at 13:59. I was definitely surprised that the United Empire lost in their AEW debut, especially if they will be facing FTR at Forbidden Door or another show. However, this could mean Beretta vs. Ospreay, likely for the IWGP U.S. Championship, is on the table. The match itself was exciting and really fun to watch. I think everyone looked excellent, and if you had never seen the United Empire before, this served as a great introduction. ***½

Speaking of the IWGP U.S. Championship, I’ll cover the “Dominion” title bout next week. For now, let’s finally get into this week’s episode of STRONG.

I was a bit hopeful Kross wouldn’t return after “Lonestar Shootout.” He was fine in his match against Suzuki, but is just someone I do not get excited about. It’s also interesting that Suzuki called him a “young boy” twice, and in his return bout is paired against a dojo student. The pairing worked out well, as the dichotomy made Uemura’s explosiveness stand-out against Kross’ more methodical approach. Kross also got to show his power, deadlifting Uemura off the mat and into a powerbomb to escape a triangle choke. Kross’ nonchalant cover after a clothesline was also great, as him selling his arm made me wonder if it was done by arrogance, or simply because his arm was in too much pain to hook Uemura’s leg. Repeated forearms to the back of the head resulted in a referee stoppage, giving Kross the win at 7:48. Kross did totally fine here. If he shows up again I’ll be less upset about it, but I’m still not hoping for it to happen. **½

The LA DOJO and Factory rivalry came to a head three weeks ago when Factory leader Marshall challenged the first LA DOJO graduate Fredericks to this singles match. Factory members Aaron Solo and Nick Comoroto are in Marshall’s corner but are quickly kicked out when the referee catches Comoroto giving Fredericks a clothesline on the floor. Marshall shocked everyone when he took out Fredericks with a back handspring enzuigiri. Fredericks takes down Marshall in the corner with a Stinger Splash and a Shibata dropkick. He locked on a Chono style STF but Marshall got the ropes to escape. Marshall also catches a leaping crossbody from Fredericks and strings a backbreaker into a Complete Shot. Marshall is exasperated when Fredericks kicks out of his sit-out powerbomb. When he goes for the Diamond Cutter, Fredericks counters with an MD attempt, which is countered by a roll-up from Marshall and leads to a series of pin attempts. Fredericks rolls through a sunset flip and penalty kicks Marshall before pulling him up into Manifest Destiny for the pin at 10:21. The story of Fredericks proving Marshall wrong by utilizing key moves from his trainer was well told. The fans were very into the nearfalls, and this is for sure the best performance I’ve seen from Marshall. I’m not dying to see him back in New Japan, but if this is the end, he went out on his highest note. ***¼

Solo and Comoroto come back out and attack Fredericks as Marshall has him distracted with a handshake offer. They are cut off by a man in black. It’s a mystery as to who it is, until they hit a BME on Solo. Christopher Daniels unmasks and helps Fredericks to his feet. Daniels tells Fredericks he is watching his back and shakes his hand. I still find it odd Daniels defeated him a few months ago, but I like Daniels and Fredericks aligned with one another. On YouTube, Fredericks asked Daniels to be his partner for the upcoming STRONG Openweight Tag Team Title tournament, which Daniels accepted.

Ishii and Dorada controlled the match for their team in the early going. Narita kept the momentum going against Robinson, but when he turned his attention to the apron to strike all of the other BULLET CLUB members, he turned around and ran into a back elbow from Robinson. Robinson pummeled Narita after a senton, and the BULLET CLUB took turns roughing up the young lion in their corner with delight. Narita slipped out of a suplex from Robinson into a sleeper. Robinson backed him to the corner, but after knocking him down, Narita got his knees up to block Robinson’s second senton attempt. Upon tagging in, Taylor cracked Robinson with the Brodie Knee, took down White with Sole Food, and wiped out Robisnon and Anderson with a somersault senton on the floor. After some corner attacks from his teammates, Romero dropped White with a standing Shiranui for two. Romero Forever clotheslines everyone on the opposing side except for Gallows, and is eventually stopped with a big boot from Hikuleo. Ishii fought his way out of the Good Brothers’ Magic Killer and gave Gallows a brainbuster, but Hikuleo knocked down Ishii with a big boot before he could even consider a pin. Dorada wiped out every other BULLET CLUB member with a rope walk dive to the floor. Romero almost had Hikuleo pinned with an inside cradle. Hikuleo powerslammed Romero as Romero came off of the ropes, then followed up with a chokeslam for the pin at 12:43. The time of the participants’ in-ring contributions could’ve been more evenly distributed, but Robinson and Hikuleo being featured on the BC side was the right call for that team. I like that Hikuleo disrupted the flow of the opposing team with a big boot twice and scored the win over the same person he and White defeated at “Capital Collision.” It seems like this was a match for him to show his worth to senior members of the BC. I also got a big kick out of how much this crowd LOVED Chuck Taylor, and hope that means he’ll at least be on the Philadelphia shows more often. The moments in this match were better than the match as a whole, but it was quite fun. ***¼

Coincidentally, the “Lonestar Shootout” match between Minoru Suzuki and Killer Kross I mentioned earlier is the featured match on this week’s episode of XTRA.