On this week’s episode of AEW Dark, two more LA DOJO students made their AEW debuts and continued their rivalry with The Factory: 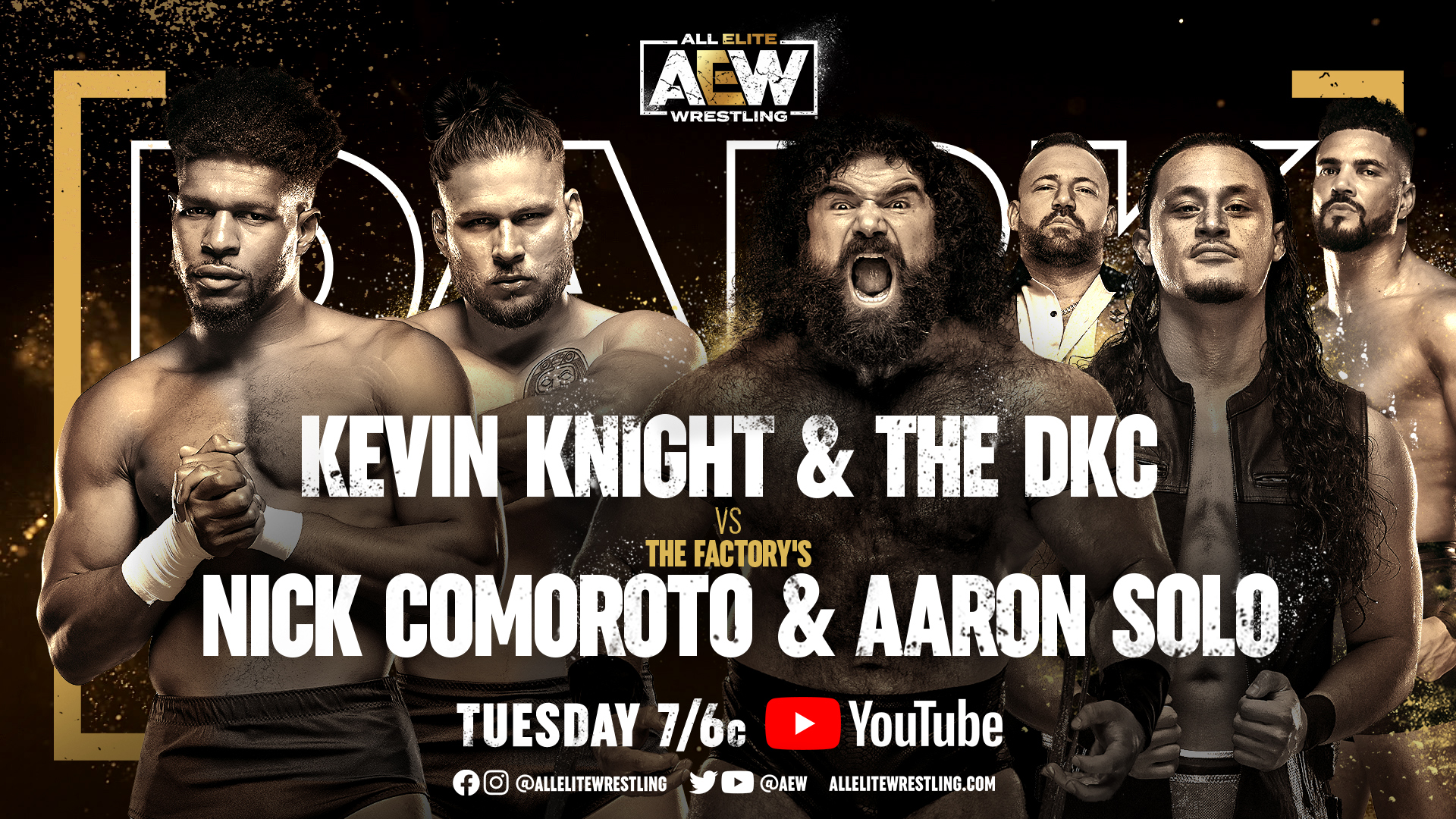 QT Marshall and Factory students Blake Li & Brick Aldridge are in Solo and Comoroto’s corner. DKC muscles Solo to his corner where Knight slams him into a standing Mad Splash. Knight is able to hit a Stinger Splash on Comoroto, but Comoroto forearms Knight out of mid-air when he tries a springboard maneuver. Solo dropkicks Knight into a vertical suplex from Comoroto for two. Marshall is able to sneak in a cheap shot as Solo distracts referee Aubrey Edwards. Comoroto misses a charge and very daintily runs into the ring post. It gives DKC the chance to tag in and unload karate chops onto Solo. He unloads with DK Fire and a falling chop to the head. Comoroto breaks his pin and Knight jumps in to pummel the Freak Beast. Comoroto ends up reversing a double suplex on Knight and DKC. Knight shoulder tackles Comotoro into a sunset flip for DKC. Comoroto kicks out of the pin and slams Knight after sending DKC to the floor. DKC snaps Comoroto’s neck on the top rope and Knight nails a dropkick, followed by DKC’s flying karate kick. Comoroto catches DKC’s dive and throws him into the barricades. Marshall grabs Knight’s foot as he hits the ropes. Solo hits a rolling gamengiri, and Comoroto spears Knight, giving Solo the pin at 8:30. Nobody really cared about this, but it was a totally solid match. Remembering Comoroto running into the ring post will provide me with a good laugh whenever I need it. **½

Marshall then offers Knight and DKC a chance to join the Factory, which they of course turn down with a karate chop from DKC to his neck. Comoroto, Solo, Li, and Aldridge all attack DKC And Knight. They pull tables out from underneath the ring, and Comoroto and Aldridge double chokeslam DKC through both of them on the floor. Finally the rest of the <b>LA DOJO (Karl Fredricks, Clark Connors, Alex Coughlin & Yuya Uemura)</b> come to their aid. They couldn’t have done so before DKC got laid out?!

NJPW originally was going to air this and the Lonestar Shootout episode on the same night last Saturday, but instead decided to air it the Friday night before “Capital Collision” and the first night of the Best of the Super Juniors tournament. I think that was wise.

A distraction from Tiger enabled Team Fithy to take down Romero with a side slam/neckbreaker combo, a staple of the Havana Pitbulls. Tiger further antagonized Romero by using his own forever clotheslines against him. A donnybrook broke out between all six men when Romero went after Tiger’s mask. Team Filthy came out on top of the fray, and once again beat down Romero in their corner. Romero is able to use Limelight’s chest to give Tiger a shiranui, and then dropkicks Limelight’s leg out before tagging in Coughlin. Kratos and Coughlin traded blows in the middle of the ring, in the same building Coughlin defeated Kratos in singles competition. Kratos slipped to the floor to avoid being slammed by Coughlin, only for Quest to wipe him and Limelight out with a dive. Coughlin lifts a dazed Kratos into a bridging fallaway slam, but Tiger saves him from being pinned. Coughlin turns Limelight inside out with a lariat and pulls him into a bridging German suplex for the pin at 8:33. Kratos attacks Coughlin from behind and gives him a spin-out side slam onto a steel chair, resulting in Coughlin being taken out on a stretcher board. That’s a solid way to goad Coughlin into a singles rematch. Otherwise nothing . **¾

We get a promo from Chris Dickinson who is taking on Ren Narita next week. That will likely still air, although it shouldn’t.

Based on Lawlor’s challenge last week, if Rosser wins this match, he will earn a future STRONG Openweight championship match. Both members of WCWC are legal at the same time. Tom Lawlor joins commentary for the bout. Rosser’s strategy was to try and only have to fight one man at once. He wiped out Isaacs using the guardrail so he could focus on Nelson. After giving Nelson a backbreaker on the ring apron and a running Death Valley Driver, he pulled Isaacs back in the ring while Nelson was in pain on the outside. Rosser ascended the ropes after taking him down, but he was ambushed by Nelson from behind and shoved down to the mat. The WCWC stopped mid match to pose with Lawlor on the commentary stage after beating down Rosser. Rosser kicked out after taking a slingshot powerslam on the floor, but the “95 Source Awards” (a dropkick/brainbuster combo) got the WCWC the win at 7:28. I was genuinely surprised Rosser didn’t get the win here, and that Lawlor didn’t get involved. Rosser came off as smart and tenacious, so at least there’s that.. **½

Tom Lawlor can’t believe Rosser’s ego in thinking he could actually defeat two people on his own. Lawlor tells Rosser a champion acts and looks a certain way, and frankly, he doesn’t even look like a worthy challenger. He tells Rosser he always liked him better bald, and even pulls out a tuft of Rosser’s hair from the breast pocket on his vest, which I guess he has saved from the time when he shaved Rosser’s head in Philadelphia last Fall. Lawlor then tells Rosser to shave his head again if he wants a STRONG title match. What makes this all the more insulting is that some of Rosser’s family is in the audience. The WCWC begin to shave his head, but Rosser grabs the razor and stares Lawlor in the eyes as he shaves his own head. Rosser then asks if he gets his title shot or not. Lawlor chews on some of Rosser’s hair before telling him “no.” Tom Lawlor then says New Japan’s “Collision” event is coming up on his birthday, and the best gift he could give himself is to get rid of the man who has been a pain in his ass for the past two years. Lawlor then proposes a title match on that date where if Rosser loses, he is out of New Japan STRONG for good. Rosser does not give an answer, which I appreciate since it is not a small thing to consider. Lawlor going back and forth on the title match situation was confusing and frankly annoying, and this went on forever, but it will likely result in Rosser becoming the champion, so fine.

US of Jay Open Challenge #6
Jay White vs. Hikuleo

This match came about due to Hikuleo confronting White at STRONG 86. White plays cat-and-mouse with Hikuleo, but Hikuleo eventually cuts him off with a shoulder block and drops him ribs first onto the guardrails. Hikuleo however misses a chop, connecting with the ring post instead, and White then shoves Hikuleo face first into the ring post. White creatively uses the ring apron to suffocate Hikuleo before giving him a neckbreaker onto the floor. White attacks HIkuleo’s left leg back in the ring, which also allowed him to cut off Hikuleo’s comeback by kicking him in the leg and delivering a DDT. White chop blocks Hikuleo when Hikuleo elbows out of a sleepwalker suplex attempt. White puts himself in a position where Hikuleo is able to powerbomb him out of the corner. White rolls to the floor to avoid being pinned, and when Hikuleo throws him back in the ring, White gives him a dragonscrew leg whip as he is re-entering the ring. White drags Hikuleo into a rope hanging DDT for two. Hikuleo grabs White’s hand to stop his barrage of chops and takes him down with a clothesline. He also pulls off a walking powerslam on White. He then snaps off a powerslam when White comes off the ropes and pulls him off in a goozle. White counters Hikuleo’s chokeslam with the Blade Runner for the pin at 18:33. I was very nervous when I saw the length of the match, but they did a fantastic job. White’s adaptability outdid Hikuleo’s strength, though they had the crowd thinking it was all over for the Switchblade before he surprised Hikuleo with the Blade Runner. Kudos to both guys for keeping me engaged in the match and making Hikuleo seem like a convincing choice to end White’s U-S-of-Jay tour. ***½

White pulls a chair into the ring, looking like he is about to hit Hikuleo, but instead takes a seat on the chair. White tells Hikuleo to be smarter than his brothers and listen to the greatest wrestler in the world. He holds up the Too Sweet once again, and Hikuleo backs to the ropes. Angry, White throws the chair behind him, and tells Hikuleo he is giving him the opportunity of his lifetime. He gets in his face as he holds up the Too Sweet. Hikuleo reciprocates the Too Sweet, which is also a bit of a surprise. So far, it’s still only the Guerrillas of Destiny and Jado who have not conformed to White.