Rok-C defended her Women’s title on October 22nd and October 23rd. While those matches have yet to surface, she also defended the title at New Texas Pro Wrestling on October 30th: 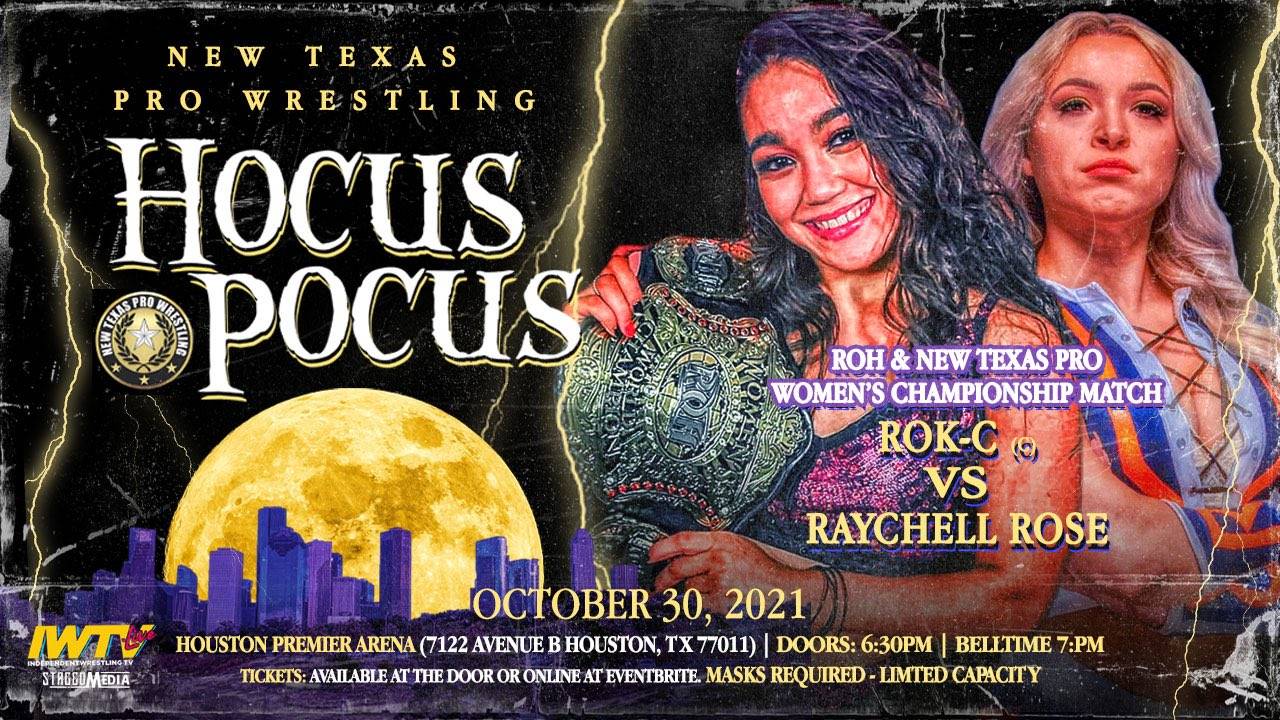 The first fall is for the New Texas Pro Women’s championship. Rok-C has been the champion since 5.29.2021 and this is her fifth defense. The second fall is for the ROH Women’s World championship. Rok-C has been the champion since 9.12.2021 and this is her fifth defense. The champion serves as the aggressor for quite a while. Rose’s manager Haley Danielle gets on the apron when Rok-C goes for a pin. Rose is able to give Rok-C a chinbreaker and then brings the New Texas championship into the ring. Rose tries to Guerrero Rok-C (wouldn’t the title not change hands?) but the fans convinced the referee it didn’t happen. Rose then decides to hit Rok-C with the title and is disqualified at 8:51. Rok-C retains the New Texas Pro Women’s championship. Despite Rok-C being unconscious for several minutes, the officials decide to let her compete in the second fall because she says it’s OK. I’ll spare you my rant but it is impossible for me to suspend my disbelief in these situations. Rok-C endures a spear and a bunch of attacks to the head. Rok-C avoids a second spear, sending Rose crashing into the ropes. She knocks down Rose with a Thesz Press and side Russian leg sweep before hitting Rok Knees for two. Rose ends a strike exchange with a Sick Kick for two. Rok-C ducks a Shining Wizard to the back of the head. She submits Rose to a crossface at 8:26, walking away with both titles at 17:19. As much as I hated the referee stuff in between falls, the story told was executed well and the crowd responded accordingly. A far cry from her Killer Kelly double title defense, but a totally worthwhile bout. **¾

Briscoe has been champion since 9.6.2014 and this is his first defense. Bennett earned this title opportunity winning an Honor Rumble two weeks prior. Maria Kanellis is in Bennett’s corner. Bennett baits Jay into a chase around the ring and ends up choking him with his boot back inside the ring. Jay fights back with stomps and gets his own choke on Bennett. Jay misses a corner splash, giving Bennett an opening to deliver a right hand and vertical suplex. Jay however slings Bennett face first into the second turnbuckle out of a Complete Shot position. On the floor, Bennett is able to send Jay into the barricades. Jay however reverses a suplex attempt onto the entrance stage. After the commercial we see both men trading offense in the ring, ending with Jay dropping Bennett with the ratchet neckbreaker. Bennett avoids the Jay Driller and puts him in the Anaconda Vise, but Jay uses the ropes to escape quickly. Bennett is warned about executing a piledriver on the apron, which he has been banned from doing due to the injury BJ Whitmer suffered from it. However, Jay turns things around into a Death Valley Driver onto the apron. Bennett dropkicks Jay out of mid-air to avoid an attack and spears him for two. Jay avoids the Twist of Fate and goes for the Jay Driller. A distraction from Maria enables Bennett to low blow Jay and drop him with a piledriver, but it only gets a two count. Bennett misses a Swanton, and Jay pulls him into the Jay Driller for the pin at 11:37. The fans were into the nearfalls and thrilled that Jay retained, making this a successful first defense for Jay’s second reign. The piledriver tease and payoff were also well done. ***

The November 3rd episode of Women’s Division Wednesday featured an encore presentation of the tag team match from the Halloween special. You can read my review of that match here.

Woods has been champion since 9.12.2021 and this is his first defense. Brian Johnson is on commentary for this bout.
*The competitors are to obey the “Code of Honor”, shaking one another’s hand before and after the match.
*Each wrestler has 3 rope breaks to stop submission holds and pinfalls. After a wrestler has used all 3 of their rope breaks, submission and pin attempts on or under the ropes by the opponent are considered legal.
*Closed-fist punches to the face are not permitted. Punches to other parts of the body are permitted, excluding low blows. The first use of a closed fist results in a warning, a second will be a disqualification.
*This match has a 60 minute time limit. If the match goes past the time limit, three judges will determine the outcome.
*Any wrestler who interferes will be automatically terminated from the roster.

LSG uses his first rope break to escape a cravate. Woods holds onto another cravate with a lot of force. LSG ends up muscling Woods into a facebuster to escape, and then applies a Cobra Clutch Muta Lock. Woods uses his first rope to escape. Woods slaps LSG hard in the face, and LSG spills to the floor. LSG tries a satellite DDT, and Woods counters with a belly-to-belly suplex onto the floor. He goes back to the cravate inside the ring. LSG eventually escapes by utilizing a stunner. LSG knocks Woods down with a rolling clothesline for two. He hits the Saintsplosion for an even closer nearfall. LSG blocks Woods’ Beast Slam with the Rocket-Bye-Baby. As he comes off the ropes with a springboard, Woods catches him with another cravate. Woods knee strikes LSG in the face. He delivers the Beast Slam and then puts LSG in the Gorilla Lock. LSG taps out at 10:37. This was a fun and intense first defense for Woods, which further solidified the Beast Slam as the new big move in his arsenal. He also established himself as a different type of Pure Champion stylistically from Gresham, with more power than finesse in his offense. LSG was a great first opponent to showcase that style against. LSG also looked totally competent against the champion and had probably his best singles outing since his match against Jay Lethal. Good stuff. ***¼

We get some highlights from last week’s Halloween Special. You can read my review of that episode here.

The Bouncers and Ken Dixon harass Ian Riccaboni and Caprice Coleman as they discuss the Honor Rumble from “Death Before Dishonor.” Beer City Bruiser is salty that Coleman eliminated him in that match. This confrontation leads to a singles match being made between Coleman and Bruiser for next week’s episode.

Bandido has been champion since 7.11.2021 and this is his fourth defense. Zayne earned this title match by winning the Honor Rumble at “Death Before Dishonor.” He also holds a singles victory over Bandido from January 2020. Jonathan Gresham is on commentary for this bout. Bandido lands a Code Red early on. Zayne slips off his shoulders and hits the Baja Blast for two. He also gets two after a flipping leg drop to Bandido’s neck. Bandido impressively catches Zayne’s charge to the corner. From a one-hand lift, he transitions into a Falcon Arrow, and scores a nearfall with a standing shooting star press. Although Zayne is able to take down Bandido with a leaping Frankensteiner, Bandido rolls through. He gives Zayne a fall away powerbomb, and Zayne nails a desperation enzuigiri to buy himself some recovery time. A battle of open handed strikes leads to Zayne setting up Bandido for a super Baja Blast. Bandido turns things around and brings Zayne down with a super torture rack facebuster for two. Zayne fights out of a super fallaway slam and connects with the super Baja Blast he attempted earlier. Zane misses the Crunch Wrap. He goes for the Taco Driver, which Bandido rolls through for a two count. He scoops a charging Zayne up into the X-knee. The 21 Plex follows, and Bandido adds an extra German suplex to get the pin at 10:15. This was disappointing. These two didn’t have the chemistry you would expect, and the structure of the match was “you do something cool and try to pin me, then I do something cool and try to pin you.” It did not have a World title match vibe to it at all. At least we got a neat moment of acknowledgement between Bandido and Gresham after the match. **¾

NEXT WEEK: Caprice Coleman takes on The Beer City Bruiser, The OGK faces Flip Gordon & PJ Black, and The Righteous and The Foundation meet in a Trios match!

Overall: Episode 493 was definitely the superior Championship Edition installment this year, but I do recommend checking out Woods vs. LSG.