Commentary is provided by Alex Koslov and Matt Rehwoldt. Kevin Kelly was in Japan covering the G1 Climax during this tour.

Team Filthy’s Danny Limelight joins commentary for this match. Uemura and Finlay get the better of the West Coast Wrecking Crew. Coughlin takes down Nelson with a diving shoulder tackle, and the mood changes when Kratos enters the contest. Coughlin’s effective chop only angers Kratos, and he blasts Coughlin with a leaping clothesline. Coughlin impressively almost slams Kratos, but when Isaacs is in the ring, he pulls off a German suplex and tags Finlay. He wipes out all of Team Filthy and scores a two count on Isaacs after a diving uppercut off the second turnbuckle. Uemura lands a leaping elbow onto Isaacs, and then a double underhook suplex. A series of offenses leads to Coughlin wowing the audience with a bodyslam on Kratos! Just moments later though, the West Coast Wrecking Crew take him out with a sit-out slam and spinebuster. Uemura victory rolls Isaacs and schoolboys him for a pair of two counts. Isaacs wheelbarrows him into a German suplex, and Nelson then lands a springback Ace Crusher for the pin on Uemura at 10:29. The action in this match was non-stop, helped by the perfunctory “isolation” segment being axed entirely. Everybody got a good chance to be showcased and they made me want to see a singles match between Kratos and Coughlin, who had to be separated after the bell. A very fun way to start the tour. ***¼

There was a lot of goofin’ around to start this match, with atomic drops from Robinson, and back rakes and nipple twists from Phnatamso. Robinson got serious with a hard left jab, following that with a cannonball senton and a regulation senton. When Phantasmo tries a crossbody, it fails, and Robinson lifts him up into the Juice Box for two. Phantasmo is able to take Robinson off the top turnbuckle with a super Frankensteiner, but Robinson kicks out of his follow up splash. Phantasmo pays homage to former BULLET CLUB leader AJ Styles with the Styles Clash, which Robinson also kicks out from. Phantasmo tries for the One-Winged Angel. Phantasmo slips out and looks for Pulp Friction. Phantasmo shoves Robinson into the referee and low blows Robinson while the referee is down, but the referee is still down when he goes for a pin. Robinson blocks Phantasmo’s superkick and lays him out with Pulp Friction for a slow two count. A lariat and the HHB (a fisherman’s cradle driver) get Robinson the pin at 13:50. When you get a supreme babyface and chicken shit heel together, it’s pretty great. The beginning part of the match easily could have been truncated, but once they got down to brass tacks it was very enjoyable. ***

After the match, Robinson calls out Moose for “Battle In The Valley” next Saturday. That match will come to pass. Speaking of “Battle In The Valley”, a video hyping the debut of Buddy Matthews is shown. He is the former Buddy Murphy, and he will face G1 Climax winner Kazuchika Okada at that event.

Narita not only has TJP grounded to begin, but he also boots Ospreay off the apron to send a message. Connors and Narita also launch him in the air with a double back drop. TJP spits water into Connors’ face. Ospreay then clotheslines Connors from the apron and sends Narita into the guardrails. Ospreay lawn darts Narita into the ring post before assisting TJP with a beatdown of Connors in their corner. By the time Connors shoulder tackles TJP and pounces Ospreay, Narita is on the apron and able to accept Connors tag. Narita overhead suplexes Ospreay for two, as does a vertical drop brainbuster. Ospreay lays out Narita with a back handspring kick and the Chelsea Grin. He looks for the Storm Breaker while TJP puts Connors in an Octopus Stretch. Both Narita and Connors counter into submissions. They escape and Ospreay sends Narita to the floor. He superkicks Connors to TJP, who with Ospreay land a double underhook facebuster/Code Breaker combo. Narita saves Connors from the pin. Connors escapes a Detonation Kick from TJP. Narita tags in and wipes out TJP with a pump kick. Connors spears TJP after Narita boots Ospreay off the apron. The Narita Special #4 pins TJP at 13:27. This was another spotlight match for Narita, who scores big with a pin on TJP. This sends a message to Ospreay who he is facing at “Battle In The Valley” while keeping the issue between former tag partners Connors and TJP alive. Rock solid main event here. ***½

TJP grabs Narita’s leg. Ospreay takes a cheap shot on Narita, laying him out with Pip Pip Cheerio. Narita ducks the Hidden Blade and kicks Ospreay back to the floor. He holds onto Ospreay’s IWGP World Heavyweight Championship title and tosses it to him. Narita then gets the microphone and says he is not interested in Ospreay’s fake belt – he just wants to defeat him. He warns Ospreay not to underestimate the LA DOJO.

Meanwhile, on this night in Japan, Hiroshi Tanahashi would make his second defense of the IWGP U.S. Title:

Tanahashi has been champion since 8.14.2021 and this is his second defense. Last year at this very event, KENTA successfully defeated Tanahashi when defending his IWGP U.S. Championship contenders briefcase. He challenged Tanahashi after laying him out with the title after a eight man tag at the G1 Final. We get some fun with Tanahashi’s air guitar and hair pulling between these two, with KENTA also wasting some time on the floor. KENTA tries to steal the belt and head for the hills after Tanahashi lays him out with a pescado. Tanahashi gives chase and ends up powerslammed onto the ring apron. KENTA removes one of the corner pads and sends Tanahashi back first into the exposed buckles. He wears down Tanahashi’s neck and gets two with a DDT. Tanahashi catches KENTA with a back elbow out of the corner and takes him down with a crossbody off the second turnbuckle. His offensive stride ends when KENTA snaps his neck on the top turnbuckle and lands a flying clothesline off the top turnbuckle. Tanahashi, however, is able to stop the Green Killer DDT with a dragonscrew leg whip. Tanahashi climbs to the top turnbuckle, only for KENTA to shove him down and dropkick him to the floor, where he sends Tanahashi back first into the guardrails. KENTA sets up a table ringside. Tanahashi avoids being put through it, but succumbs to the Dream Killer and a top rope double stomp. KENTA has second thoughts when he looks for Go 2 Sleep, instead placing Tanahashi on the table ringside. Tanahashi rolls off and takes down KENTA with a Slingblade on the floor. He then puts KENTA through the table with the High Fly Flow! When they get into the ring, Tanahashi hits Slingblade and Aces High before trying the High Fly Flow again. KENTA gets his knees up, and Tanahashi crashes ribs first onto them. Even after taking two Busaiku Knees, Tanahashi is able to block the G2S with a pair of dragonscrew leg whips. KENTA sends Tanahashi into the buckles and hits a third Busaiku Knee for two. Tanahashi blocks another Go 2 Sleep mid-move with Slingblade. KENTA sends Tanahashi chest into the exposed buckle as he comes off the ropes. KENTA finally hits Go 2 Sleep to win the match and the title at 23:44. I was a little shocked to see Tanahashi’s reign end so quickly, but I appreciate KENTA’s 15 month journey for this title bearing fruit. I also really liked the story of this match, with KENTA working over Tanahashi’s back, utilizing the exposed turnbuckle sparingly, and the tease of the Go 2 Sleep paying off. This was just as good as their match from the year prior – the draggin portions of the match and lack of shenanigans even each other out. I expect some interesting defenses from KENTA, perhaps with some NOAH boiz. ***¾ 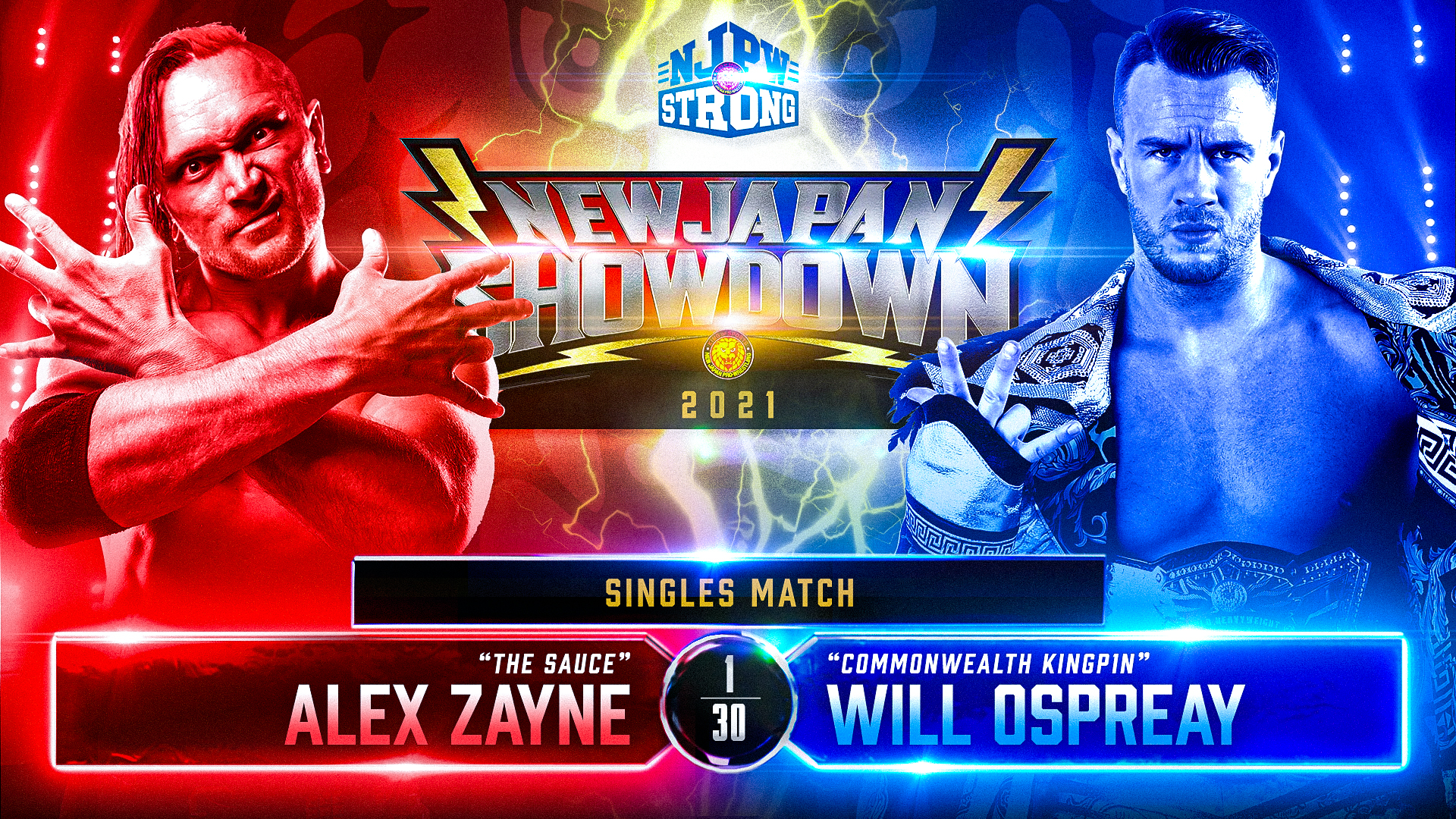 This is Zayne’s first match in NJPW since December 2020, spending a brief time in WWE in 2021 as Ari Sterling. The fast paced opening exchange ends with both men knocking each other down with simultaneous boots to the face, although Ospreay almost connected with the OsCutter. Ospreay chops Zayne off the top turnbuckle and to the floor. He double stomps the back of Zayne’s head after placing him on the ring apron. Ospreay spins Zayne several times before delivering a backbreaker. Zayne wins a strike exchange with a rolling clothesline and lands a flipping leg drop to his neck for two. Ospreay escapes a potential Taco Driver, taking down Zayne with a back handspring kick afterwards. Pip Pip Cheerio gets a two count. Zayne avoids the Cheeky Nandos Kick. Ospreay lands on his feet out of a super Frankensteiner from Zayne. A couple kicks to the face lead to a powerbomb attempt. Zayne counters that into a huracanrana for two. Ospreay takes him down with a Spanish Fly. Zayne however successfully pulls off a super Frankensteiner when Ospreay heads up top, and follows up with the Baja Blast for two. Ospreay avoids the Crunchwrap Supreme. He decks Zayne with the Chelsea Grin twice. Zayne blocks the OsCutter. He tries the Taco Driver. Ospreay flips onto his feet mid-move and quickly hits the Hidden Blade for the pin at 11:14. This was as exciting and fun as you would expect, and probably would’ve been the best match on many episodes of STRONG. I very much hope Zayne becomes a regular once again in NJPW USA. ***½