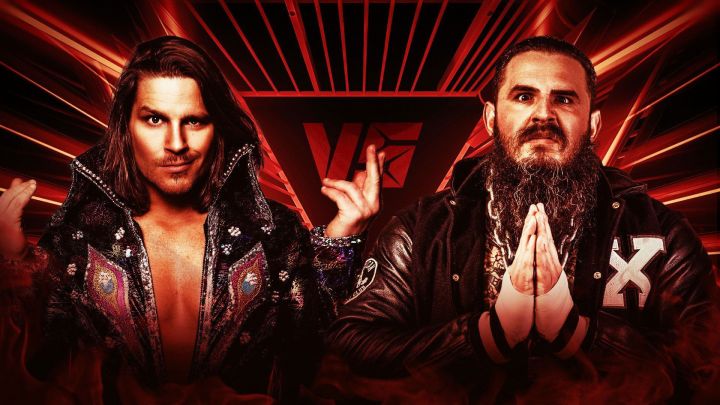 The Pure Title tournament ended last week, with Jonathan Gresham besting “Hot Sauce” Tracy Williams in the finals and becoming the new ROH Pure Championship. After the match, he introduced the triumvirate of himself, Jay Lethal, and Williams as “The Foundation.”

The Pure Rules are as follows:
*The competitors are to obey the “Code of Honor”, shaking one another’s hand before and after the match.
*Each wrestler has 3 rope breaks to stop submission holds and pinfalls. After a wrestler has used all 3 of their rope breaks, submission and pin attempts on or under the ropes by the opponent are considered legal.
*Closed-fist punches to the face are not permitted. Punches to other parts of the body are permitted, excluding low blows. The first use of a closed fist results in a warning, a second will be a disqualification.
*Any wrestler who interferes will be automatically terminated from the roster.

Johnson immediately uses a closed fist punch at the bell, which gives him a chance to catch his opponent off guard and use his speed to keep control. After a suicide dive he nails Draper with a diving clothesline and lariat in the ring for two. Johnson uses a rope break to escape a waistlock. Draper gives Johnson his own closed fist punch and takes him over the top rope with a crossbody block. Johnson makes it back in barely before the twenty count, and is twirled up into a powerslam from Draper for two. Draper aggressively attacks Johnson’s left arm. Johnson feigns an ankle injury and kicks out Draper’s knee. Draper however drives him back to the corner and then lands a backdrop. Johnson kicks out of a Doctor Bomb twice, the second time spending his second rope break. Johnson manages to catch Draper with a Tower of London for two. Johnson tries to hold the tights in a roll-up as they exchange pinning combinations. He also bites Draper’s hands to escape a waistlock. Johnson elbows his way out of Magnum K.O. and lariats Draper. Johnson tries to cheat by pinning Draper with his feet on the ropes for leverage. The referee catches him and counts that as Johnson’s final rope break. Behind the referee’s back he jabs Draper in the throat and gives him a spinning neckbreaker. Draper uses his first rope break to stop the pin. Johnson is almost caught using a second closed fist. His stalling allows for Draper to scoop him up into the Magnum K.O. for the pin at 11:03. This was more about the colorful story and character components than substantive wrestling, which helped this match and the two competitors stand out from the Pure tournament bouts. Johnson was too incompetent of a bad guy to use the rules in a way that would help him win, but it did help him stay more competitive than he likely would have otherwise. He and Draper had shockingly good chemistry too. Between this match and the triple threat match on YouTube, I am very interested in seeing more of Draper in the future. The Johnson character gets on my nerves, but there is enough talent there that I find myself less against him now than I was pre-COVID. ***

King has made it abundantly clear he is now a solo act, no longer associated with Villain Enterprises. An aggressive lock-up leads to King booting Castle in the corner. Castle maneuvers himself to the floor and he trips King. Back inside he takes down King by his ankle and works over his lower back and midsection. When King makes it back to his feet, Castle attempts to bring him back down in a front facelock. King backdrops Castle away. Castle knees King in the corner twice. On the third try, King explodes out of the corner with a running crossbody. King focuses his attack on Castle’s lower back, and goes for a pin after a few blows to the chest. Castle ducks under a clothesline and drops King with a DDT. Castle slides on a sleeper hold. King drives Castle twice to the corner to release it. Castle ducks another clothesline and gives King an exploder suplex. A knee trembler gets Castle a two count. Castle German suplexes King after blocking yet another clothesline. He wants the Bangarang, but King counters with a piledriver for two. After catching their breath, they trade strikes with King knocking Castle down with a forearm strike. Castle goes for a sleeper hold again but this time King goes to the ropes, sending Castle tumbling to the floor. Castle uses the bottom rope and apron for a Frankensteiner. King drives Castle back first into the apron and tosses him over the barricades where a crowd would be. King throws Castle back inside and heads to the top turnbuckle. Castle cuts King off with another knee strike to the head and hits the Denouement for two. As Castle strikes King’s mid-section, King swings him out into a Boss Man Slam for two. King German suplexes Castle and blasts him with a lariat. The Ganso Bomb follows, giving King the pin at 14:34. This was a big win for King, who fought hard against a tactical and skillful former World Champion, ultimately securing the victory. It was a key win in proving he is capable of being successful on his own. With three losses since ROH resumed operations, one has to wonder what’s next for Castle. Great match overall. ***½

Overall: It was important for ROH to keep the momentum going from the critically acclaimed Pure Tournament and I think they were successful. While the tournament may be over, the template has remained with two quality wrestling bouts preceded by in-depth character profiles. These profiles add significance to the matches and make me more invested in both the characters and the stories. As long as they keep up this style of television, I will remain compelled to return each week.

NEXT WEEK: Kenny King faces Shane Taylor in singles competition, while The Briscoes face the Soldiers of Savagery.