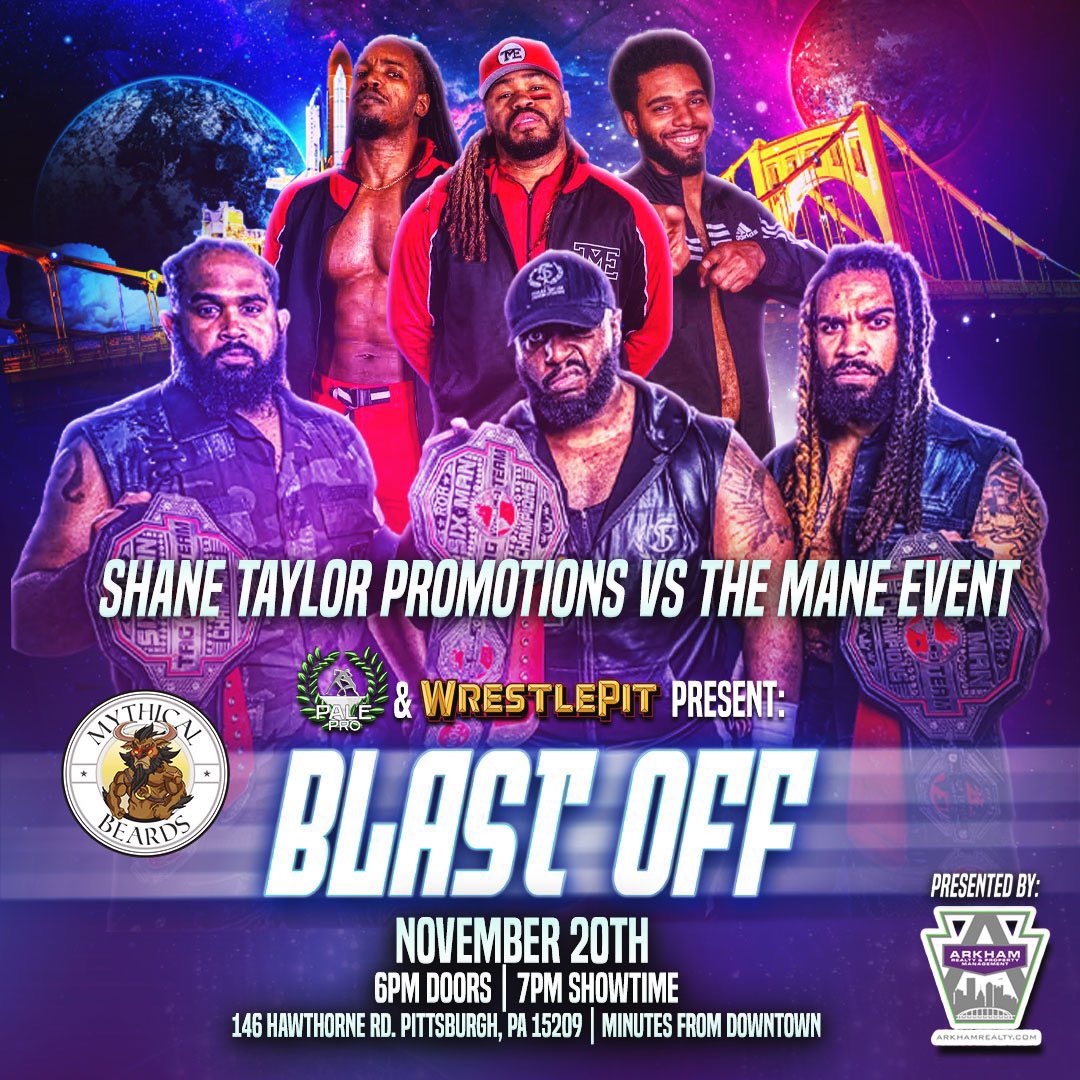 Shane Taylor Promotions have been champions since 2.19.2021 and this is their eighth defense. Ron Hunt is in STP’s corner. S.O.S. wisely pummel Johnson, the smallest man in the entire match to start. Jones and Moses square off, then Taylor and Davis get into a slugfest. It takes Davis, Jones, and Johnson working together to pull off a suplex on Taylor. A brawl between all six men on the floor leads to Johnson being decked by Taylor’s signature haymaker back in the ring. S.O.S. assault Johnson in their half of the ring until Johnson drills Moses with a DDT. Jones wipes out Taylor and Kaun with a somersault senton. Davis and Jones then give Taylor an atomic drop/Blockbuster combo for two. Johnson attempts a high crossbody, but Kaun catches him and gives him a gutbuster. The Mane Event saves Johnson, but when they look for s superplex on Moses, Taylor and Kaun cause a Tower of Doom to fall. Johnson valiantly fights Taylor, and although he does an admirable job, the Marcus Garvey Driver puts him down for the three count at 17:38. They told a good story as STP knew who the weak link was amongst their opponents, but also knew a lot of work had to be put in to keep the Mane Event down so they could capitalize on that factor. It was a fun fight, but a little repetitive. **¾

That same day, Josh Woods made a surprise defense of the Pure Championship: 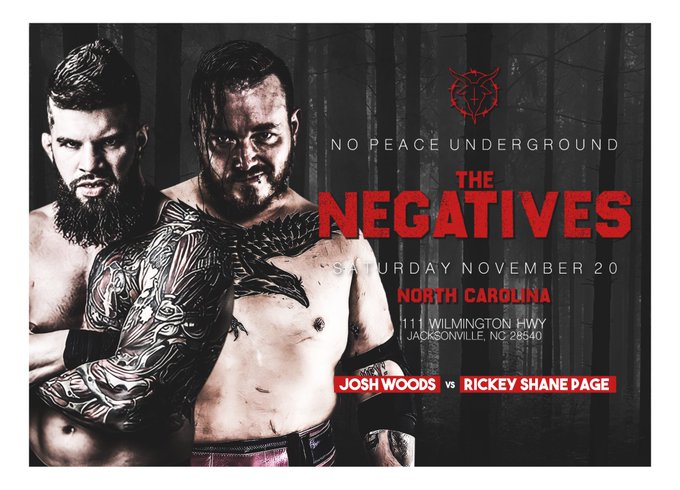 Woods has been champion since 9.12.2021 and this is his second defense. Brian Johnson is on commentary for this bout.
*The competitors are to obey the “Code of Honor”, shaking one another’s hand before and after the match.
*Each wrestler has 3 rope breaks to stop submission holds and pinfalls. After a wrestler has used all 3 of their rope breaks, submission and pin attempts on or under the ropes by the opponent are considered legal.
*Closed-fist punches to the face are not permitted. Punches to other parts of the body are permitted, excluding low blows. The first use of a closed fist results in a warning, a second will be a disqualification.
*This match has a 60 minute time limit.
*Any wrestler who interferes will be automatically terminated from the roster.

Page flips off Woods at the bell, so Woods Judo throws Page into an armbreaker, forcing Page to spend his first rope break right away. Page gets Woods’ foot trapped underneath the bottom rope. This not only makes Woods waste his first rope break, but enables Page to trip Woods face first into the canvas. Woods catches Page’s leg as Page attempts a leapfrog. Page scrambles to the ropes, using his second rope break, before Woods can apply an ankle lock. Page controlled Woods by his wrist for a while, but Woods was able to bring Page to the mat and snap his arm and elbow. Page retaliates with a reverse Stinger Splash and a suplex toss across the ring. Although Woods is able to connect with a springboard knee strike, Page does a ton of damage to his back after the suplex toss. Woods is in trouble after a super belly-to-belly suplex, but he is still able to avoid a frog splash and get Page in a triangle choke. Page uses his third and final rope break to escape. Hey gets Page in a triangle choke, which Page escapes with a Liger bomb. Woods pulls him back into the triangle choke. He then puts on ankle lock, deadlifts Page into a German suplex, and then applies a short-arm scissors. Page taps at 15:08, and Woods retains the title. This was really well put together. Page utilized his size and power over Woods, and although he didn’t know the rules as well and thus burned his rope breaks, he still found a method of exploiting them. Woods’ arm work eventually paid off and the crowd very much enjoyed cheering him. This was such a great encapsulation of who both of these guys are as wrestlers, and is a bit of a hidden gem. ***

The Beer City Bruiser and Ken Dixon are in Milonas’ corner. Jonathan Gresham, Tracy Williamss, and Josh Woods give their support before Titus heads to the ring. The Pure Rules are as follows:
*The competitors are to obey the “Code of Honor”, shaking one another’s hand before and after the match.
*Each wrestler has 3 rope breaks to stop submission holds and pinfalls. After a wrestler has used all 3 of their rope breaks, submission and pin attempts on or under the ropes by the opponent are considered legal.
*Closed-fist punches to the face are not permitted. Punches to other parts of the body are permitted, excluding low blows. The first use of a closed fist results in a warning, a second will be a disqualification.
*This match has a 15 minute time limit. If the time limit expires, three judges will determine the outcome.
*Any wrestler who interferes will be automatically terminated from the roster.

Milonas has a solid handle on Titus at the beginning, to the point where Bruiser and Dixon laugh at him. Titus purposefully tires out Milonas to the point where when Titus puts on a headlock, a tired Milonas stumbles to the ropes, which counts as his first rope break. Milonas thrashes Titus’ back. Titus foolishly tries a belly-to-belly suplex, with Milonas instead crashing down on him for a two count. Titus gets another two count after a Boss Man Slam. Titus makes a comeback when Milonas misses a corner attack. From the corner, Milonas cracks Titus with a closed fist and is issued a warning. Titus blasts Milonas with a pair of yakuza kicks before finally pulling off the belly-to-belly suplex for a two count. Milonas uses his second rope break when Titus goes for a half crab. He re-applies the half crab as the 15:00 time limit expires. A few moments later, referee Todd Sinclair gets word that the three judges (Gary Juster, Will Ferrara & Sumie Sakai) decided unanimously that Titus was the winner. Their rationale was that Titus used no rope breaks while Milonas used two and a closed fist. That rationale is solid, although Milonas rolled Titus for most of the match. Totally solid match, but I missed the little things Milonas would do in his other Pure matches, and it felt inconsequential with the Final Battle competitor already lined up and the future of ROH uncertain. **½

The November 24th Episode of Women’s Division Wednesday features a replay of the three way from last week’s television episode. You can read my review of that match here.

Mark has some fun trying to take some of Danhausen’s teeth for himself, but has no fun with PCO pummeling him. Danhausen boldly tries a Jay Driller on Mark. Mark escapes and Jay gives Danhausen a big boot for his troubles. During the break, Danhausen delivered a slingshot German suplex to Mark, but even so the Briscoes maintained control of the contest. Danhausen does tag PCO after giving Jay a German suplex. PCO Hot Shots Jay and delivers a boot to the face. PCO malfunctions after Mark repeatedly punches him in the head and ear claps his head twice. PCO now thinks he’s teaming with Mark again like they did at Final Battle. PCO snaps out of it fairly quickly and takes out the Briscoes with a double clothesline. Danhausen tags himself in and pours his teeth into Mark’s face before giving him a pump kick. PCO assists Danhausen with a double chokeslam. Sledge comes out to ringside when Danhausen and PCO get in a bit of an argument. PCO and Sledge get into a slugfest ringside, leaving Danhausen open to a double Beele toss from the Briscoes. The Jay Driller from Jay allows Mark to pin Danhausen at 8:54. There were some fun moments here, and I especially like that Mark triggered PCO’s malfunctioning since he had previous history teaming with him and knew how to push his buttons. With PCO leaving ROH and Danhausen injured, it’s unfortunate their story likely won’t go anywhere, but I do appreciate the Briscoes getting momentum before their tag title shot at Final Battle. **¼

Rok-C has been the Women’s World champion since 9.12.2021 and this is her seventh defense, but her first defense in ROH. We had six women willing to wrestle twice for a title shot, but all Gia Scott had to do was complain to Maria Kanellis to get one? Well that makes those six women seem kind of foolish, no? We get some attitude shown by both women, and a frustrated Scott hitting the floor after kicking out of a crucifix pin. Rok-C knows better than to bye Scott’s handshake, but Scott is able to avoid an alita and mow down the champion with a running shoulder block. Rok-C gets Scott into a Guillotine to stop her onslaught. Scott drives Rok-C to the corner to escape, but Rok-C takes her down with a Thesz Press. Rok-C rolls Scott into Rok Knees and then applies a crossface. Scott rolls Rok-C on her shoulders to escape and blasts her with a spear for two. Scott has Rok-C in her crosshairs for another spear. Rok-C stops Scott as she is charging with a knee strike to the jaw. Rok-C re-applies the crossface and Scott submits at 9:06. This was definitely the best Scott has looked in her nominal ROH appearances, but the result was never in doubt. Even if I have a problem with her getting a shot in the first place, she made the most of the opportunity. This was also a satisfactory win for Rok-C en route to Final Battle. ***

Backstage before the match, Lethal reveals he has not heard from The Foundation since they wrestled the Righteous and it has clearly gotten to him. EC3 holds open the ropes for Lethal. Lethal dropkicks him the moment he gets back in the ring and to the floor. Lethal suicide dives onto EC3 and throws him into the barricades. Back in the ring, however, EC3 avoids a corner elbow attack and aggressively sends Lethal face first into the buckles. EC3 trash talks Lethal after sending him chest first into the corner again. Claiming Lethal “has no fight in him” energizes Lethal and he crashes mid-air with EC3 as they go for stereo crossbodies. Lethal escapes a superplex attempt and pushes EC3 to the floor, while also crashing to the floor himself. Back inside Lethal delivers the Lethal Combination. Lethal hits Hail to the King. He lines up EC3 for a superkick while also mouthing “I didn’t say that.” EC3 ducks the superkick and drops Lethal with an SDT. Lethal hits a Cutter on EC3 and is about to hit the Lethal Injection when the video footage of him saying “I don’t even like The Foundation” plays again on the screen. This distraction allows for EC3 to counter the Lethal Injection. He drops Lethal with a butterfly facebuster and submits Lethal to The Purpose (crossface) at 15:11. I am not at all into the mind games stuff EC3 is a part of, even when he isn’t directly involved. They both put in a good effort, but the match felt long, and with Lethal already gone from ROH it felt meaningless. I know that isn’t ROH’s fault since this was taped so long ago, but it just makes it tough to care, especially when my interest with EC3 is at a deficit. **

Overall: It’s to ROH’s credit that taping so far in advance has not affected them in a serious manner until now – two thirds of this episode being severely affected by that choice makes it a wash. To the credit of the title match, it exceeded my low expectations, but this episode is one you can comfortably skip.