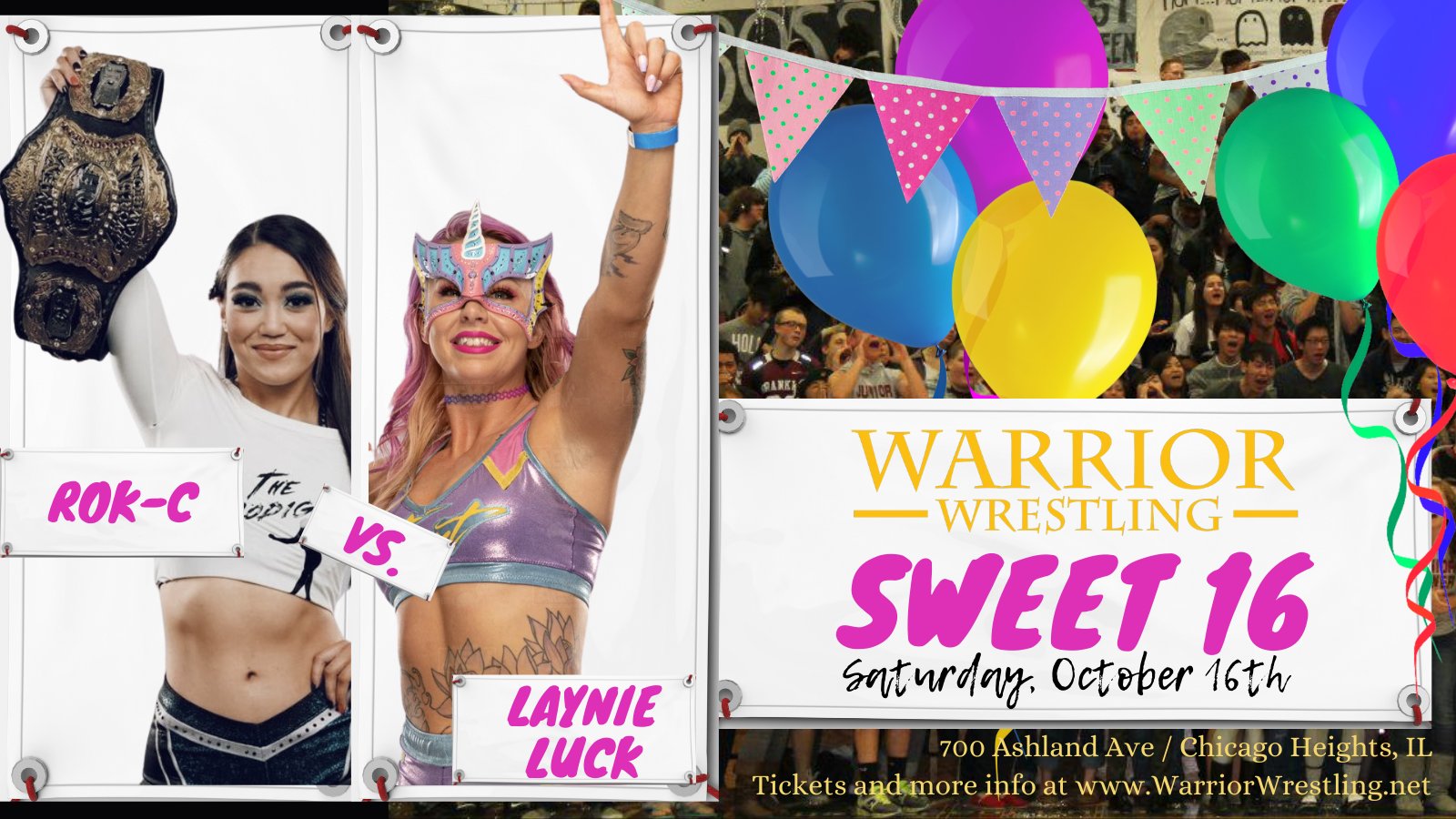 Rok-C has been the ROH Women’s World champion since 9.12.2021 and this is her second defense. Luck’s ROH track record isn’t great, including a singles loss to Rok-C herself, but these outside defenses are the wild west in terms of challengers. Rok-C seems angry that the match is kept so evenly. She also falls for a handshake that turns into a boot from Luck. She also counters Rok-C’s bodyscissors into a uranage for a nearfall. Rok-C sends Luck face first to the middle turnbuckle after succumbing to Luck’s three Amigos, and Luck stops her with a clothesline. Luck sunset flips Rok-C into a Regal Stretch. Rok-C uses the ropes to escape, then rolls Luck into her own crossface. Luck rolls Rok-C onto her shoulders to escape. She drops Rok-C with Total Anarchy for two. Rok-C pulls Luck into a Guillotine choke. Luck drives Rok-C to the corner to escape, but Rok-C knees Luck in her temple. She hits Kneecolepsy on Luck for two. Luck escapes another crossface. She surprises Rok-C with a kick to the head from the floor and lands a somersault senton off the top rope for two. When Luck resists another crossface, Rok-C cracks Luck in the face with a knee strike for two. Luck rebound German suplexes Rok-C for two, and gets the same result with two follow up schoolgirls. Rok-C uses the ropes bodyscissors Luck back into a crossface. This time, Luck taps out at 11:10. I would say this was probably Luck’s best performance in the ROH-sphere to date. They may have gone a bit too nearfall crazy, but I do like the story of Rok-C’s crossface being built up throughout the match and paying off. A rock solid defense for Rok-C, if you will. ***

The October 19th episode of Week By Week featured a Pure Rules encounter:

Brian Milonas calls himself “the best pound for pound Pure Wrestler in ROH” which rules, especially since he has had one Pure match before this. Will Ferrara is in Martin’s corner, and The Beer City Bruiser and Ken Dixon are in Milonas’ corner.

The Pure Rules are as follows:
*The competitors are to obey the “Code of Honor”, shaking one another’s hand before and after the match.
*Each wrestler has 3 rope breaks to stop submission holds and pinfalls. After a wrestler has used all 3 of their rope breaks, submission and pin attempts on or under the ropes by the opponent are considered legal.
*Closed-fist punches to the face are not permitted. Punches to other parts of the body are permitted, excluding low blows. The first use of a closed fist results in a warning, a second will be a disqualification.
*This match has a 15 minute time limit. If the time limit expires, three judges will determine the outcome.
*Any wrestler who interferes will be automatically terminated from the roster.

Milonas attacks Martin’s left arm and whips him shoulder first into the mat. He legdrops Martin’s arm, but as he goes for the arm again while Martin is on the mat, Martin looks to get him in an armbar. Milonas steadies himself using the rope, which forces Martin to release and counts as Milonas’ first rope break. Martin pesters Milonas with his repeated hammerlock applications. Milonas ends up elbowing him away and taking him down with a flying clothesline. He splashes Martin down in the corner and nails a running hip attack. He wears down Martin with a chinlock and slams Martin face first into the canvas. Milonas swings Martin into a side slam for two. Martin knocks down Milonas to one knee and hits him with a knee trembler. Martin knocks down Milonas with a running boot but only gets two. Martin tries a double wrist lock then goes for a sunset flip. Milonas lifts up Martin by his throat and belly-to-belly suplexes him overhead. After a running crossbody, Milonas lands a seated splash on Martin’s back and locks on a Camel Clutch for the submission victory at 8:16. This character for Milonas is just the right amount of goofy, and I like how it yields unique Pure Rules matches.I really enjoyed the dynamic he and Martin had, and I honestly would be so down for Milonas vs. Woods down the line. **½

The October 20th episode of Women’s Division Wednesday featured an encore presentation of the triple threat women’s match from two weeks ago. You can read my review of that match here.

Now onto this week’s episode, subtitled “VLNCE vs. Pure,” as the entire card features the members of VLNCE UNLTD taking on the members of the Foundation.

We actually start with Vincent asking his fellow members of the Righteous if “he” is going to love his all white outfit. All of them are infatuated with the outfit, and Vincent concurs. The rest of the Righteous are wearing all white too

Something I really liked is Caprice Coleman putting over how large and strong Titus’ legs are when he had Deppen in a grounded headscissors, as it also provides some context as to why his dropkick in particular is so devastating that it is a finisher. Deppen does an admirable job hanging with Titus on the mat, and Titus grabs the ropes when Deppen is readying him for a Bow and Arrow stretch. As they go back-and-forth, Titus stops a knee strike from Deppen and uses the ropes for his signature belly-to-belly suplex. Titus follows up with a butterfly suplex for two. Deppen kicks out Titus’ leg and drops a knee across Titus’ neck. Deppen does some more damage to Titus’ neck. Homicide makes his way ringside to cheer on Deppen as Deppen hits a sliding boot to the side of Titus’ head. Titus gets his knees up to block a senton. He strings a knee breaker and suplex together. Deppen dropkicks Titus to the floor and follows with a tope suicida, a nice tribute to the man cheerleading him. Titus kicks out of a double stomp and also avoids Deppen’s Knee Trembler. Two corner boots lead to Titus giving Deppen a brainbuster for two. He fights for and gets Deppen in a half crab. Homicide distracts Titus to the point where he releases the hold. Homicide slides a chair into the ring and distracts referee Todd Sinclair long enough for Deppen to use it. He then hits the Knee Trembler for the pin at 12:23. Homicide’s interjection felt really unnecessary, as they were having a perfectly cromulent match before he got involved. It was still quite good, but the ending took the wind out of my sails. **¾

An incensed Rhett Titus lets Brian Zane know he is not happy none of his partners were anywhere to be found when Homicide came to the ring.

Jay Lethal is in the Foundation’s corner, and Homicide is in VLNCE UNLTD’s corner. The Foundation attacks VLNCE UNLTD before the bell, right after VLNCE UNLTD obeys the Code of Honor. Even with the jump from the Foundation, when the dust has settled, VLNCE UNLTD have Gresham isolated in their corner. They pummel the former Pure champion until Gresham leapfrogs over Dickinson, resulting in Dickinson tackling King by accident. He gets the tag to Williams who endures some strikes from Dickinson before knocking him down with a rolling clothesline. Williams suplexes Dickinson off the second turnbuckle for a two count. Williams stomps on Dickinson’s ankles relentlessly before rolling him into a modified ankle lock. King saves his partner, and Gresham keeps the attack going on Dickinson’s ankles. Dickinson is able to catch Gresham with a knee strike to the face and tags in King. Gresham manages to hyperextend King’s knee and puts him in a sleeper hold. Williams holds off Dickinson as long as he can until Dickinson shoves Williams onto King and Gresham. Dickinson stops a charging Williams with an enzuigiri. King has Williams in a Boston Crab while Dickinson puts Gresham in a crossface. Williams crawls to the ropes to escape, and Dickinson throws Gresham outside out of a waistlock. Dickinson and Williams trade submission holds. Dickinson gets Williams in a rear-naked choke with a waistlock. King holds onto Gresham so he can’t break it up, and Williams passes out at 12:52. This had a lot of intensity and felt like it was either team’s match to take for the duration of the bout. It is surprising to see VLNCE UNLTD go 2-0 as well. It may have dragged a little bit, but overall was entertaining, and I am glad neither Lethal or Homicide were involved. ***¼

Lethal and Homicide are hot under the collar following this tag match and want their singles match to begin now.

After an intense opening exchange, Lethal lands a suicide dive. Homicide rakes Lethal’s eyes and delivers a tope suicida. Homicide avoids a dropkick from Lethal back inside the ring. As Lethal goes for a figure four leg lock, he finds a fork in Homicide’s boot and passes it off to Todd Sinclair. Homicide gets it back, but it gets stuck in the turnbuckle when he tries to stab Lethal with it. Homicide gives Lethal a t-bone suplex and Sinclair gets rid of the fork. Lethal escapes a Cop Killa and superkicks Homicide. Tony Deppen comes out with a chair, perhaps to repay Homicide for his help earlier in the night. Surprisingly, Dutch blindsides Deppen to stop him from getting involved. Lethal ducks a lariat from Homicide and drops him with the Lethal Injection for the pin at 5:37. Nothing to this at all. This ain’t 2005, folks. *

Dutch joins the rest of the Righteous on the stage, all of whom are applauding Jay Lethal. Lethal is confused by their presence.

Overall: There was some solid wrestling and intriguing ending, but I wouldn’t call this a “must see” episode. I understand philosophically why these two units might be at odds, but now that neither team has any titles, the stakes feeel low and thus I don’t find myself captivated in this “faction warfare”, regardless of match quality. That said, next week’s episode looks like a lot of fun, and I am pumped for the Championship Edition episode in two weeks.