ROH’s exporting of title defenses continued on September 25th, with Rok-C defending the ROH Women’s World Title in her home state of Texas: 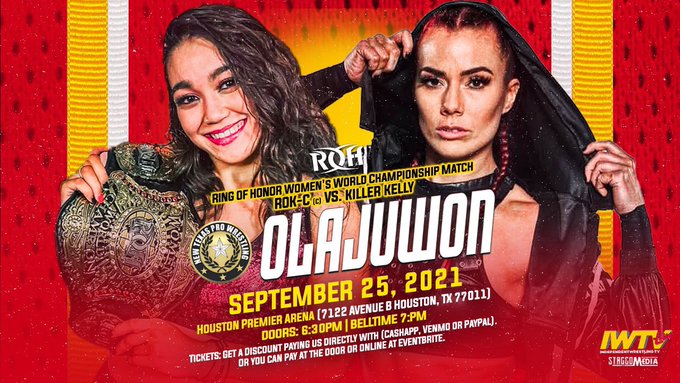 Rok-C has been the ROH Women’s World champion since 9.12.2021 and this is her first defense. Rok-C has been the New Texas Pro Women’s champion since 5.29.2021 and this is her fourth defense. Kelly is not happy Rok-C is able to get the better of her on the mat to start. She eagerly looks for a rear-naked choke, while also trying to pin her in a Gedo Clutch. Rok-C ends up rolling herself and Kelly back to their feet. Rok-C comes off the top with a wrist drag across the ring, and gives Kelly a confident curtsy. Kelly boots her down and pummels the back of her head in response. Rok-C schoolgirls Kelly for two, and is knocked right back down with a forearm smash. Kelly goes after Rok-C’s face and neck and wheelbarrow suplexes Rok-C to counter a bodyscissors attack. As Kelly comes off the ropes, Rok-C grabs her arm and maneuvers her into a knee strike. She pummels Kelly after a Thesz Press. She looks to take down Kelly in an armbar, but Kelly pulls Rok-C into a short-arm clothesline. She holds onto the wrist. Rok-C slips off of Kelly’s shoulders, drops her with a side Russian leg sweep, and nails Kneecolepsy for two. Kelly pulls Rok-C down from the top turnbuckle and into a fisherwoman’s buster for two. Rok-C rolls Kelly into a crossface, even rolling her back to the middle of the ring when Kelly is close to the ropes. Despite this, Kelly is able to get to a different rope and roll to the floor. Kelly halts a dive from Rok-C. When they end up back in the ring they knock each other out with stereo pump kicks. Rok-C rocks Kelly so hard with a slap, Kelly’s mouth guard comes out, but Kelly smiles as she puts it back in. Kelly captures Rok-C ‘s arms and blasts her with a headbutt before butterfly suplexing her. A corner seated dropkick scores her three very close nearfalls. Rok-C takes Kelly outside and lands her suicide dive successfully. Back in the ring, Rok-C ducks Kelly’s pump kick and wheelbarrows her back into the crossface. Kelly taps out at 19:01. I really liked the dynamic of Kelly’s intensity and Rok-C’s perseverance and grit. I also like that a few of the things that Kelly countered early on were successful for Rok-C on the second go around and ended up getting her the victory. The crowd was also very much into Rok-C which helped. A totally solid and worthwhile first defense of the title. ***½

On the September 28th episode of “Week by Week”, the Shinobi Shadow Squad exploded!

The third member of the former 3S and trainer of both Isom and Mooney, The World Famous CB, is on commentary for the bout. Mooney goes for various pinning combinations before trying a cross armbreaker. Isom finally scores with a pop-up The intensity builds as they trade forearm shots. Isom connects with an enzuigiri, but Mooney lands a fallaway kick to the head. Isom tosses Mooney to the corner with a Northern Lights suplex. He swings him out into a suplex for two. Isom shows some hesitation when going for the Promise, which allows Mooney to counter into a cutter when Isom finally does go for it. Mooney DDT’s Isom on the ring apron. When a cradle Falcon arrow doesn’t get him the pin, Mooney goes for the cross armbreaker again. When he converts to a triangle choke, Isom powers Mooney up into a powerbomb. He lands The Promise for the pin at 7:20. I really disliked Isom’s moment of hesitation. Even if he and Mooney were friends in the past, nothing in the match prior to that moment made it feel organic whatsoever. Otherwise, this was fun, and Mooney brought a chaotic kind of energy you don’t see in many Isom bouts. I really wonder what Mooney’s future in ROH will be. **½

Maria Kanellis-Bennett joins commentary for this bout. Adora had control until Sakai landed a German suplex. Adora is surprised when Sakai absorbs Adora’s chops, but Adora keeps them coming and lands an enzuigiri for two. Sakai gets Adora in a choke hold and has to let go by nature of rolling to the ropes. She goes for a crossbody to the floor, which Adora subverts and puts Sakai in a Cattle Mutilation on the floor! Back in the ring she butterfly suplexes Sakai. Sakai blocks a strike and plants Adora with a fisherwoman’s buster for two. Adors blocks a wheelbarrow and suplexes Sakai. Sakai blocks Lariat Tubman and pulls Adora into an armbreaker attempt. Adora rolls Sakai onto her shoulder, placing all of her body weight on Sakai’s legs, pinning Sakai at 6:07. We got the same intensity from Sakai we got in her tournament match, which ruled, and it ruled here too. Even with the short match duration they kept things engaging from start to finish, especially that awesome floor crossbody leading to the Cattle Mutilation. Great showings from both performers, and Adora beating a veteran will boost her credibility in the division. **½

After the match, Maria announces that Trish Adora has signed with Ring of Honor, which is such a huge boon for the division and ROH at large.

Both Zayne and Rust returned to ROH at “Death Before Dishonor” last month. Zayne revealed on his episode of the ROH Strong podcast that he is replacing Jake Atlas, who shortly after also returning to ROH and DBD tweeted he would be leaving wrestling indefinitely. Rust pulls on Marks’ beard while in an abdominal stretch and twisting up his left arm. Mark chops him to the corner where Jay tags in and stomps Rust down. When Rust grabs his ankle, Mark kicks him from the apron and tags back in. After a suplex, the Briscoes look for a double football tackle, and Rust tags in Zayne before they charge. Zayne takes down Jay with a slingshot headscissors, but Jay ducks a clothesline and blasts Zayne with a forearm smash. Mark follows Zayne to the floor with a flying tomahawk chop, suplexing him on the apron before knocking him down with a big boot. The Briscoes take down Rust on the floor too so they can isolate Zayne back inside the ring. Zayne thwarts a charge by Jay and escapes a suplex from Mark, finally tagging in Rust. He gives both Briscoes axe kicks and puts Mark in the Gaia LockLock. Jay saves Mark and the Briscoes knock him to the floor. Zayne clotheslines Mark outside as Rust pulls out Jay and Zayne lands a springboard Asai moonsault onto the Briscoes. Rust assists Zayne with a super Frankensteiner to Mark for a two count. Mark takes out Zayne with a Saito suplex. He hits the Spicy dropkick to Zayne as Jay drops Rust with the Jay Driller. Mark’s Froggy Bow gets the Briscoes the pin at 11:16. Zayne and Rust worked incredibly well as a first time team. They knew how to make their diverse styles work together and convincingly seem like they had a chance to beat the cornerstone of ROH’s tag division. The fact that the Briscoes were aggressive and focused is also a perfect response in losing to the OGK at the PPV, and those two dynamics made for a super fun and engaging match. Probably my favorite Briscoes match since they reunited. ***½

Brian Zane introduces the ROH World Women’s Champion Rok-C. She tells Brian that winning the title meant everything to her, because she got to see the look in her parent’s faces when everything she worked for became a reality. She vows to defend the title against anyone and everyone, anytime and any place. The C in Rok-C used to stand for confidence, and now it stands for champion. The Allure, Miranda Alize, Trish Adora, Willow and Allysin Kay all come out, presumably to stake their claim as challengers to Rok-C’s title. Before they can do so, Maria Kanellis-Bennett makes her way to the stage. She tells the women in the ring that in the forthcoming weeks, the six of them will compete in two triple threat matches. The two winners of those matches will face each other in a singles match, and the winner of that match will challenge the Women’s Champion at “Final Battle.” Sounds good to me.

During the commercial break, Alize attacked Rok-C. Quinn McKay came to check on her after the fact.

Danhausen’s team is answering an open challenge from VLNCE UNLTD, who challenged “any four wrestlers who want to get violent” to a match. Danhausen almost pins Homicide with his own Ace Crusher and makes him go to the ropes in an STF. Deppen and Flamita pick up the pace. Dickinson assists Deppen with some double team offense. Flamita fights out of Dickinson’s running Death Valley Driver, takes him down with an enzuigiri and superkick, and tags in Sledge. Sledge takes down Dickinson with a back elbow and delayed suplex. Dickinson comes back with a dropkick off the second turnbuckle. VLNCE UNLTD all choke Sledge in their corner before continuing with their onslaught. Sledge manages to reverse a waistlock from Homicide and pull him into a ripcord clothesline. PCO tags in for the first time after Sledge kicks Homicide across the ring. PCO wipes out all of VLNCE UNLTD with clotheslines, then trades chops and forearm strikes with his former tag team partner Brody King. PCO pops up King into a powerbomb for two. King gives PCO a piledriver which results in PCO malfunctioning. He thinks he is tagging with King again, and King plays along, tagging in PCO who attacks his real partners! He even gets PCO to hit the PCOsault onto Sledge. PCO is sent outside when he comes to. Danhausen is able to take down King, Deppen, and Dickinson, but a moment of celebration allows Dickinson to blast him with an enzuigiri. Flamita takes out Dickinson with a back handspring back elbow. Deppen wheelbarrows his way into a Canadian Destroyer on Flamita. PCO takes out Deppen with a Liger Bomb. PCO looks for a PCOsault on Homicide after hitting a clothesline. He gets himself crotched on the top rope by Homicide. Sledge spins Homicide into a body slam. King boots Sledge before dropping him with the Ganso Bomb for the pin at 15:05. I am typically not a fan of PCO’s malfunctioning gimmick, but I thought it was done very cleverly in this match. VLNCE UNLTD getting back on track after King lost his World title match at DBD was the right call, but I also like that Danhausen got some time to shine too. This was a bit better than I anticipated. ***

Overall: With new faces in the opener, the kickoff of the Women’s title in earnest, and new set dressing for the first time in over a year, this was a refreshing episode. I still haven’t bought into the VLNCE UNLTD group just yet, but tonight was definitely a good night for them, and the opener banged. I also am hopeful Willow and Allysin Kay stick around in the Women’s Division for good. I also recommend the women’s title match to anyone who subscribes to IWTV.

Next Week: Dalton Castle and Dak Draper team up to face S.O.S., and The OGK face Rey Horus and ROH World Champion Flamita.