Clark Connors vs. The DKC

Three episodes ago, Katsuyori Shibata accepted DKC as a young lion. As is tradition for a young lion, DKC is now wrestling in plain black trunks and boots, but still has his trademark long hair. The wrestling is fairly simple: headlocks, chops, and hip tosses for the most part. After a couple dropkicks, DKC goes for a cross armbreaker. Connors is almost able to break it using his own strength, but ultimately has to get his feet on the ropes. Connors halts DKC with a spear and locks on the Boston Crab to submit DKC at 7:22. DKC facing another LA DOJO competitor to start his new path in STRONG makes sense. Connors being his former tag team partner added a wrinkle to the match, as he knew him well before the Dojo, but also what to expect from his recent training regimen. Bell to bell this wasn’t anything special but I love the idea of DKC starting over. **

Things get intense when their grappling leads to kicking one another in their hamstrings. Dickinson dragonscrew leg whips Romero’s left leg and attacks it with various submissions. Romero lands a back kick on the rebound from a missed enzuigiri. He jams Dickinson’s arm across his shoulder, targeting Dickinson’s left arm and wrist. Romero double stomps Dickinson on the top rope. Dickinson jackknife pins Romero, and when Romero reverses it, Dickinson grabs a bodyscissors ankle lock. Romero has to roll his way to the ropes to escape. Romero baits Dickinson into an arm jam over the top rope and drops him with a standing Shiranui for two. When he goes for another Shiranui, Dickinson counters with a running Death Valley Driver. He then locks Romero in an STF for the submission at 9:53. Dickinson further establishes himself as part of the STRONG roster in defeating one of the top dogs in a really engaging match – nothing at all to complain about. ***

Rosser lost to this exact BULLET CLUB triumvirate two weeks ago with ACH and Blake christian by his side. Rosser and Hikuleo shove one another before the bell and have to be restrained by their partners, and a brawl between all six individuals starts the match. Hikuleo violently shoves Rosser into the edge of the stage. Rosser backs his way to his corner after fighting off of Hikuleo’s shoulders and Rush tags himself in. Phantasmo, who pinned Rush in the opening round of the Super J-Cup via low blow, tags in, but immediately tags out to KENTA. Rush outpaces KENTA and with TJP takes him down with a double back elbow. Phantasmo rakes TJP’s eyes to help KENTA escape a Muta Lock, then knees TJP in the back from the apron. KENTA DDT’s TJP and Hikuleo attacks Rosser and Rush. BULLET CLUB triple teams TJP in their corner, utilizing some illegal tactics in the process. TJP maneuvers so that BULLET CLUB ends up taking one another down. Rush tags in but is quickly bodyslammed by Hikuleo. Rush is bullied by the BULLET CLUB, but makes a tag to Rosser when he takes out Phantasmo with a rolling haymaker on the floor. Rosser takes down Hikuleo with a flying tackle and a seated splash for two. Rosser and KENTA fight outside. TJP sends Hikuleo and Phantasmo to the floor with a double dropkick, and he and Rush follow them out with dives. In the ring, Phantasmo catches Rush’s springback cutter, but Rush small packages him for two. Rush blocks Phantasmo’s superkick that pinned Christian two weeks ago and sunset flips Phantasmo for the pin at 11:54! That was an exciting and action packed match, and the BULLET CLUB shenanigans were more fun than they were irksome. This match gets lost because of the aftermath, but it is quite fun. ***¼

BULLET CLUB attack their opponents after the match. The lights go out, and when they come back on, Jon Moxley is in the ring with the IWGP U.S. Heavyweight Championship! He lays out Hikuleo and Phantasmo with the title, then lays it at his feet. He and KENTA go forehead to forehead before trading forearm strikes. KENTA tries the Go 2 Sleep, but Moxley instead drops him with the Death Rider! Moxley thinks KENTA has been talking so much trash because he thought politics or an ocean would keep them separated for good. But now, the boogeyman of NJPW is here, and KENTA’s dreams of becoming U.S. Heavyweight Champion just became a nightmare.

The next day, it was announced that Moxley would defend the title against KENTA on Friday, February 26th on the 29th episode of STRONG. 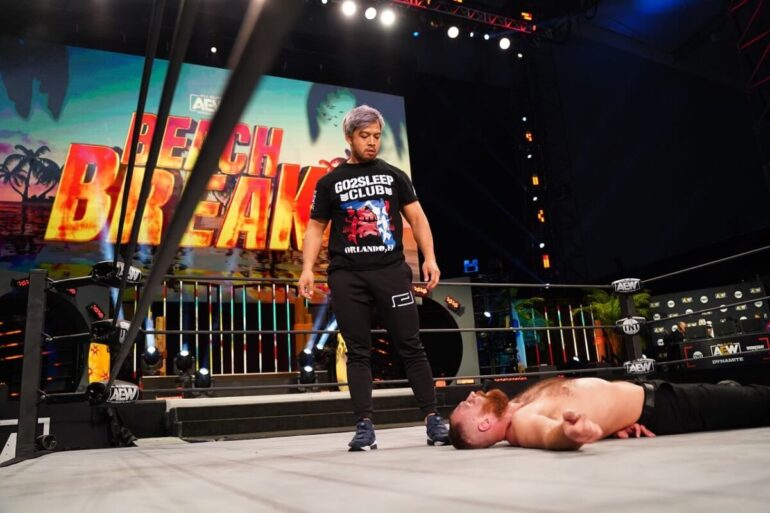 It wouldn’t be long at all until KENTA retaliated. On February 3rd at AEW’s Beach Break edition of Dynamite, the main event featured a six man tag team match where Jon Moxley teamed with Death Triangle’s PAC and Fenix to face Kenny Omega and the Good Brothers. The Good Brothers pinned Fenix to win the match at 15:24. Omega and The Good Brothers kept pummeling Fenix after the bell until Lance Archer came to his aid. Moxley was left alone with Omega and he was blindsided by a masked man. After revealing themselves to be KENTA, he dropped Moxley with the Go 2 Sleep. The next day, a main event was made for the February 10th episode of AEW Dynamite, pitting Archer and Moxley against Omega and KENTA in a Falls Count Anywhere tag team match.